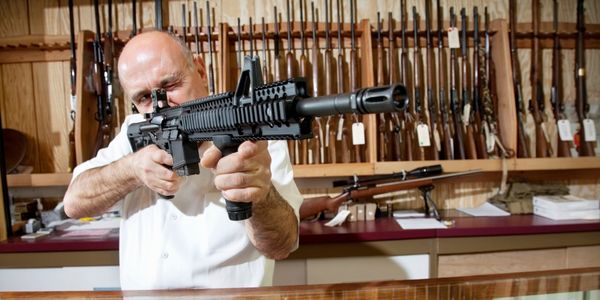 Instead of leading, Trump is scaring masses of people into buying guns to 'protect' themselves. This will only lead to more violence and death.

Living in the United States these days feels like living within an opaque, dark cloud. There is so much fear and confusion that it comes as no surprise that the Federal Bureau of Investigation (FBI) reported the summer months broke records for firearm background checks. March saw 3.7 million gun background checks. June saw 3.9 million. July, 3.7 million. These numbers compared to the same months in 2019 show that the number of people arming themselves have close to doubled.

People are scared. The entire world stands at the mercy of the novel coronavirus, and folks in the United States have been left without compassionate, comprehensive leadership. On top of that, the pandemic coincides with intense unrest in the nation where police violence is ubiquitous and a broken criminal justice system refuses to hold authorities accountable. The dam broke after the murder of George Floyd and the waves calling for justice, for equality, and for true healing have not stopped.

Trump and his administration have done nothing to dispel fear, and everything to fan its flame. Trump continually refuses to acknowledge or denounce police violence, a phenomenon with deep roots in white supremacy -- another thing Trump won't openly condemn. During peaceful Black Lives Matter protests, federal agents have instigated violence, denied people their first amendment rights to peacefully assemble, and have empowered civilian militias -- white supremacists, Proud Boys, and neo-Nazis. In the first presidential debate, Trump told the Proud Boys, a violent, white supremacist fascist group to "stand down and stand by", which they are now using as a rallying cry to take up arms. He also told his supporters to "go to the polls and watch very carefully." Deploying illegitimate poll watchers has been a favorite method of voter intimidation by Republicans, and Trump's direct endorsement of such activities is terrifying.

One member of these types of militias, Kyle Rittenhouse, murdered two peaceful protestors and injured another. Rittenhouse is only 17, making his possession of the AR-15 style semi-automatic rifle -- an assault weapon -- illegal.

Illegal or not, Rittenhouse was able to get his hands on two of these highly deadly weapons. The numbers have shown that more guns are in circulation than ever in the United States. Rittenhouse was enabled by the people around him, empowered by the president, and felt entitled that night by police actions -- they offered him water, thanked him for his help, and after he murdered two people, let him go back home.

If gun sales continue at their current rate, and the U.S. president continues to encourage racist vigilante violence, there will be more Kyle Rittenhouses, their victims exponential. While many of the people who are buying guns will not use them like Kyle Rittenhouse did, they are still a danger to themselves and others -- this many new gun sales means inexperience, uneducated people are wielding these life ending tools. More guns do not equal more safety.

Guns also facilitate the suicide epidemic the U.S. is experiencing in large part due to the COVID-19 pandemic. There have so far been 75,000 so-called "deaths of despair," many of which utilized guns.

When you look at countries that have implemented gun buybacks to combat firearm violence, you see success. In 1996, Australia ran a year-long national gun buyback program, purchasing and destroying about 600,000 firearms. In the following years, deaths from gunfire fell by close to 50%.

Individual states have implemented gun buybacks before, but the United States has never held one at a federal level. There has never been a better time. We need to get this many guns out of circulation, and COVID-19 has left the economy in shambles. Many, many people need financial assistance. By offering monetary compensation for assault weapons, the government incentivizes people making the right, safe choice of getting rid of their unnecessarily powerful guns. Assault weapons do not belong in countless inexperienced civilian hands. The federal government needs to make people feel safe and protected so that they don't feel like they need to take things into their own hands.

Care2
Instead of leading, Trump is scaring masses of people into buying guns to 'protect' themselves. This will only lead to more violence and death.
SHARETWEET