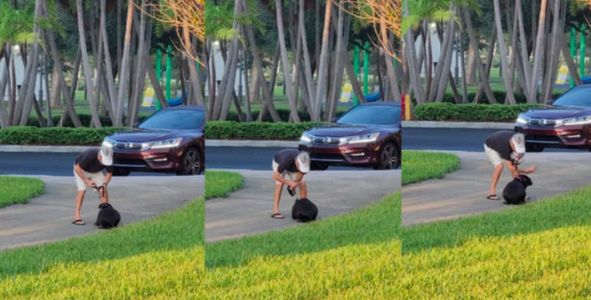 This Man Gets to Keep Two of His Dogs Even Though He Is an Animal Abuser!

When someone is convicted of child abuse, we put limits on their ability to access all kids, not just the one they got caught abusing. So why is it different for animals?

Case in point: just recently, a man in Boynton Beach, Florida abused one of his three dogs on camera and the authorities only removed that single dog from his care. Yet he still has two others that are undoubtedly in danger.

Sign the petition to demand local authorities remove all dogs from his care!

The horrible incident was caught on tape by a photographer who donates her time photographing animals at local rescues to help get them adopted. The photographer was playing with her own pup when an unfamiliar dog, a 2-year-old female Pit-Lab mix named Adi -- short for Addison -- approached them. A man drove up and angrily exited his car while the woman was trying to find another leash for the sweet girl. What happened next is disgusting.

The man stormed towards the dog, which appeared to cower from him. Then he began beating her in plain sight! The photographer was able to capture the very end of the incident on film and it's gut-wrenching. The man stoops down and repeatedly strikes poor Adi. It seemed clear from the poor baby's trembling that this was not the first time the young dog had experienced such extreme violence.

Luckily, the video helped authorities find the man and, after an in-home investigation, Adi was removed from his custody. But he had two other dogs at his house and they are still there! We have no reason to believe this man would only beat one dog and not his others.

We need to get ALL the animals removed from his custody immediately, and prevent him from ever accessing or abusing animals again. If that's how he treats his dogs when he knows someone is watching, we shudder to consider what he's doing in private.

Please sign on to tell the animal investigator with the Boynton Beach Police Department, Liz Roehrich, to remove all animals from this man's care immediately!

Care2
This Man Gets to Keep Two of His Dogs Even Though He Is an Animal Abuser!
SHARETWEET