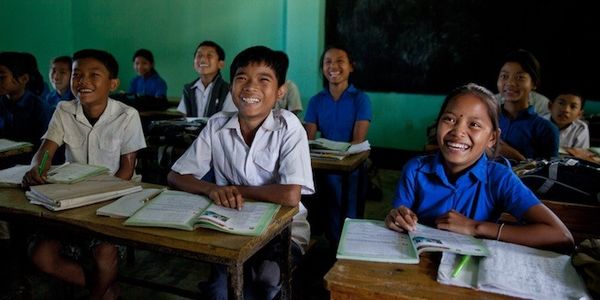 Urge Congress to partner with UNICEF to improve the lives of kids around the world!

Saving more children's lives involves everyone pitching in, including the U.S. Government. That is why we ask Congress to maintain the Government contribution to UNICEF at $134 million for Fiscal Year 2021.

As a reflection of our American values, the U.S. Government's annual contribution to UNICEF is part of America's investment in reducing child mortality and improving the lives of vulnerable children around the world.

Speak out today and show your Members of Congress why they should partner with UNICEF to protect children most in need around the globe.
read petition letter ▾
Subject: Please maintain the U.S. Government's annual voluntary contribution to UNICEF!

I am writing to ask you to provide $134 million for Fiscal Year 2021 as the U.S. Government's voluntary contribution to UNICEF, included in the State, Foreign Operations, and Related Programs Appropriations. This is the same funding level for UNICEF as provided in the Fiscal Year 2020 omnibus agreement.

The U.S. Government's support for UNICEF is an effective investment in saving and improving the lives of vulnerable children around the world and is an example of assistance that reflects our American values.

Since its founding in 1946, UNICEF has helped save more children's lives than any humanitarian organization. Thanks to strong, bipartisan House and Senate support for UNICEF and for child survival, the number of children dying before age five from preventable causes has dropped by more than half since 1990. However, 5.3 million children still die every year unnecessarily, and UNICEF continues to work to reach every single vulnerable child.

The funding UNICEF receives in the annual appropriations enables UNICEF to be an indispensable partner of the United States in protecting children from preventable deaths, supporting basic education, fighting the impact of HIV/AIDS on children, and protecting children from violence, exploitation, and abuse. The contribution also enables UNICEF to partner with American service organizations such as Kiwanis International to fight iodine deficiency disorders and maternal and neonatal tetanus, and Rotary International to work for the global eradication of polio. These are examples of successful initiatives that are strongly supported by the American people.

The appropriations for UNICEF also position UNICEF to respond quickly to emergencies, including helping families affected by the recent Ebola outbreak in the Democratic Republic of Congo, where UNICEF has reached nearly 35 million people with information, 2,837 schools with handwashing facilities, and 9,685 separated and orphaned children with assistance.

UNICEF extends the reach of the support received by the United States and others to address the humanitarian needs of children by working both in and around places like South Sudan, Venezuela, Yemen, and Syria.

If the United States were to eliminate the U.S. contribution to UNICEF, it would severely compromise UNICEF's ability to partner with the United States to help vulnerable children survive and thrive, invest in innovative solutions, and respond rapidly to crises. The U.S. contribution to UNICEF is one of the most worthwhile global investments in children we can make, so I encourage you to sustain the funding for UNICEF at $134 million in the appropriations for FY 2021.

Thank you for considering my request. I look forward to hearing from you.

Care2
Urge Congress to partner with UNICEF to improve the lives of kids around the world!
SHARETWEET