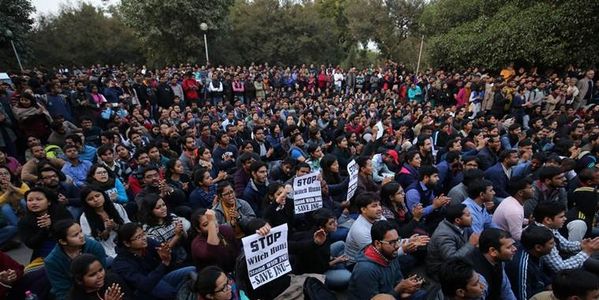 Faculty, Students and Staff of Simon Fraser University urge the Vice Chancellor of JNU to uphold the institutional autonomy and the democratic rights of the student community.

We, the undersigned faculty, students, staff and other members of Simon Fraser University, stand in solidarity with the students, faculty, and staff of Jawaharlal Nehru University (JNU) in New Delhi, India. We condemn the government-sanctioned police action on the JNU campus and the illegal detention of the JNU Student Union President, Kanhaiya Kumar, and seven other students. We deplore the manner in which political dissent is being stifled in India, including in its universities, and condemn the widespread witch-hunt of left-wing students that this police action has unleashed.
We see these recent acts as representative of a larger trend: the imposition of an authoritarian and regressive agenda in institutions of higher learning from the Film and Television Institute [FTII], the Hyderabad Central University [HCU] to Jawaharlal Nehru University [JNU]. From the suppression of the prolonged struggle of students at FTII, to the suicide of gifted Dalit research scholar Rohith Vemula at HCU, which has been widely described as institutional murder, to the most recent illegal detention of the student leader Kanhaiya Kumar and the pervasive police presence at JNU, there has been a blatant disregard for administrative and legal norms and the democratic rights of the student community.
These actions are embedded in a deeply chauvinistic Hindu nationalism, which espouses a casteist and Brahmanical, homophobic, patriarchal and Islamophobic worldview. We find it truly repugnant that this ideology is being enforced with mass violence, a complicit neoliberal media, pliant university administrators, the brutal hand of the police, and the very colonial law against sedition formerly used to imprison Indian nationalists such as Mohandas K. Gandhi.
Universities are spaces for free enquiry, questioning, debate, and dissent, without which there can be no advancement of knowledge. This necessarily involves the recognition of the existence of politics within the university, itself, because all knowledge is implicated in power. The critique of existing social structures and the forms of knowledge that sustain them is at the same time fundamental to the on-going legitimacy of the democratic political order. Students at a university have a responsibility to energetically and forcefully pose political questions and in the process challenge dominant opinions. This has been a particularly important and time-honoured tradition at JNU.
We understand that JNU has been one of the leading institutions in India to sustain critical and engaged enquiry that clearly threatens the neoliberal agenda that India has been pursuing for some years. The targeting of JNU and other universities for a “purge” of critical students labeled “anti-national” is deplorable as an attack on democracy and the idea of a university, while it is no doubt in accord with the neoliberal construction of education as the instrument for the production of disciplined and compliant workers and consumers.
As members of the academic community in Canada--one with many diverse ties with universities throughout India--who are closely watching with growing alarm the profoundly troubling developments in JNU and in the country as a whole, we stand in solidarity with the students, faculty and staff of JNU as they non-violently resist this infringement on their democratic rights. We therefore urge the Vice Chancellor of JNU to uphold the institutional autonomy and the democratic rights of the student community. We also implore the government of India to immediately drop all charges against the arrested students and to stop all attacks on the right of students to freely express themselves.

Care2
Faculty, Students and Staff of Simon Fraser University urge the Vice Chancellor of JNU to uphold the institutional autonomy and the democratic rights of the student community.
SHARETWEET