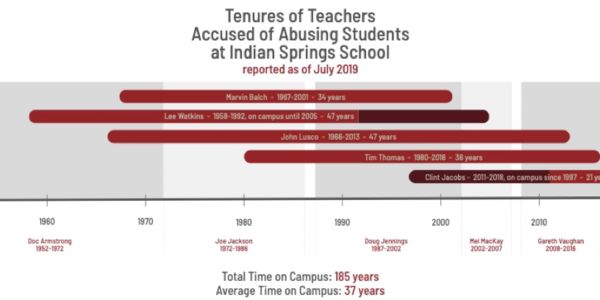 Open Letter to the Indian Springs School Administration and Board of Governors From Alums, Parents, and Friends

We are Indian Springs alums, parents, and friends who care about the school, and we support victims/survivors of sexual misconduct.

As alums, many of us were aware of sexual misconduct by teachers during our time as students or learned of it after we graduated.

We were heartened to learn that Indian Springs was inviting victims/survivors to share their stories and seemed ready to address its longstanding problem of systemic sexual misconduct by teachers.

An Important Message from Head of School Dr. Sharon Howell and Chairman of theBoard Libby Pantazis, 12.1.2017

An Important Message from Head of School Dr. Sharon Howell and Chairman of the Board Alan Engel, 7.23.2018

But we were disappointed in the school's report on the investigation, sent out in a letter on June 18, 2019.

3. Under the "Policies and Procedures" section, the letter refers to yet 2 more teachers who were recently terminated and banned from campus for sexual misconduct: "When such allegations are substantiated, the faculty or staff member is terminated from Indian Springs and prohibited from returning to campus. This is the process that we followed with respect to two faculty members who were terminated in recent years." The letter does not name these faculty or specify when they were fired.

4. The letter does not address failures of oversight that allowed multiple sexual misconduct perpetrators to remain on campus for so long, and until so recently. Marvin Balch, Leland Watkins, John Lusco, Tim Thomas, and Clint Jacobs were on campus for an average of 37 years. (See infographic below)

5. In these ways, the letter presents teacher sexual misconduct at Indian Springs as a problem of the distant past, when we know that it has continued until very recently.

6. By naming so few people, the letter also suggests that sexual misconduct at Indian Springs was perpetrated by a few bad apples, when we know that the problem has been systemic.

2. Publicly rescind all honors and awards given to teachers credibly accused of sexual misconduct.

3. Hire a victim/survivor agency to:

4. Include at least 2 alums who are victims/survivors of ISS teacher sexual misconduct in the re-opened investigation and wider accountability process. They should:

5. When possible, make restitution to victims/survivors. This includes:

6. Recognize that all family members of sexual misconduct perpetrators are indirect victims of that misconduct, and some may also be direct victims. Accordingly, the school should:

7. Respond to this letter and meet its demands in a timely manner. By September 30, 2019, the school should:

Recent examples of abuse in the Catholic Church and in numerous independent schools teach us how deeply an institution's lack of transparency and accountability can revictimize survivors. Additionally, lack of transparency and accountability all but guarantees lasting damage to that institution in the long run: loss of trust, loss of respect, loss of financial support, and costly lawsuits.

As Indian Springs alums, parents, and friends, we believe everyone in the community has a responsibility to speak up. We come to you in good faith, hoping you will hear us and respond with greater transparency and commitment to victims/survivors. We hope you will demonstrate the moral courage that Indian Springs instilled in us as students. Again, if victims/survivors were brave enough to come forward when the school asked them to, the school should be brave enough to name their abusers.

We care about Indian Springs and believe it can survive an honest reckoning with its history of systemic sexual misconduct. But we will not be complicit in shielding the institution from accountability with our silence.

Indian Springs has an opportunity to be a leader and model for other schools by being transparent, accountable, humble, and victim/survivor-centered in its response to its history of systemic sexual misconduct. The school can send the message to alums and current students alike that if they are abused, they will be believed, protected, and supported, and their abusers will be held accountable.

A Note to Other Alums, Especially Victims/Survivors of Abuse
We are here to listen and support you. If you would like to contact us about your experiences, or share your thoughts with us, please send an email to issaccountability@protonmail.com.

If you are victim/survivor, you are welcome to share your story publicly if you choose. Please be aware that public statements may jeopardize your case, should you choose to make an official report to the school, or take action in civil or criminal court. Again, if you would like to contact us privately, please send an email to issaccountability@protonmail.com.

Note: Comments that deny, minimize, or blame victims for sexual misconduct will be removed.

Care2
Open Letter to the Indian Springs School Administration and Board of Governors From Alums, Parents, and Friends
SHARETWEET