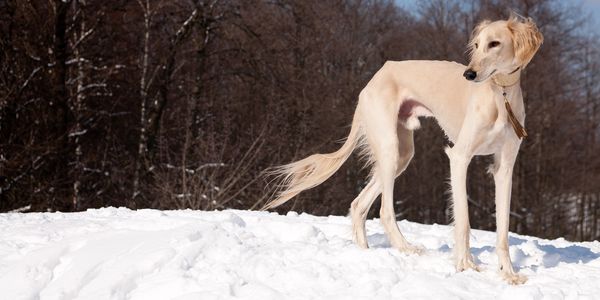 It was the coldest night on record in Scotland in 11 years. The picturesque town of Gorebridge, sitting to the east of Glasgow, was covered in snow -- roads, gardens, and hedges that line them traced in glowing white. It must have been a beautiful site for those who live there. But one homeowner noticed something a bit different about their snowy hedges -- a poor, freezing dog had been thrown on top of one of the 6-foot bushes, helpless to get down and to safety. And worse still -- the poor thing had been completely shaved, leaving its skin bare and defenseless against the freezing temperatures and precipitation.

Sign the petition and ask that the Scottish SPCA (SSPCA) find whoever shaved and abandoned this dog to freeze to death!

Rescuers identified the dog as a saluki, a breed known for its slight frame and long, straight hair. Salukis carry very little weight and are therefore already sensitive to the cold, even with their coat for protection; those who are caring for the sweet dog say that had he not been found, he most likely would have "succumbed to the elements within a day or so..."

Authorities actually think that this poor dog's fur had been shaved to disguise it, meaning whoever abandoned it didn't want their heinous crime to be traced back to them. The fact that this would make the dog more likely to freeze to death was just a horrific, morbid bonus. Anyone can bring a dog to a shelter if they can no longer care for it for any reason. It's beyond cowardly when someone chooses to put that animal in danger instead.

Well their plan didn't work, and now the SSPCA is asking anyone with information about this sweet sulaki to come forward. Sign the petition and support their unending efforts until this would-be animal murderer is found!