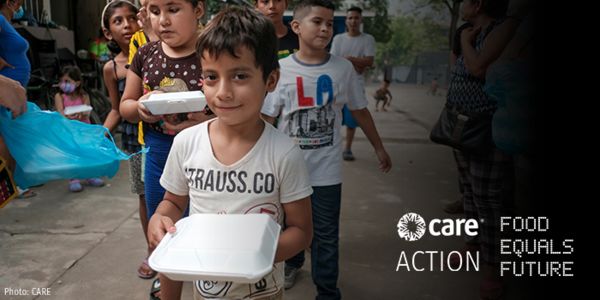 Time is of the essence. A staggering 828 million people face hunger and malnutrition. Legislation that would help feed the world will soon expire in U.S. Congress, leaving millions without reliable access to food.

Without food, there is no future. Urge U.S. Congress to pass the Global Food Security Act into law this year and ensure the U.S. keeps its commitments to fighting hunger around the world and preventing it from getting worse.

Your elected officials have the power to tackle childhood malnutrition, eliminate gender inequality in agriculture, and invest more in women small-scale farmers to create resilient, inclusive food systems for the next generation. But they need to hear from you first. Don't wait — add your name now to support a well-fed future for families and their communities.

We are staring down a global hunger crisis of epic proportions — how the United States acts now will determine how long it lasts, how far it reaches, and how many people it impacts. In order to meet immediate needs, I urge you to take action now on the Global Food Security Act and ensure it is enacted before the end of the year.

Right now, 828 million people worldwide are undernourished or chronically hungry — and the worst is likely yet to come. Over the last two years, COVID-19, conflict, and extreme weather events caused levels of hunger and malnutrition to rise sharply to unprecedented levels. The conflict in Ukraine and its ripple effects are raising food, fuel, and fertilizer costs and disrupting agriculture and trade around the world.

Right now, programming within the Global Food Security Act (GFSA) that helps feed the world is set to expire, just when it is needed most, particularly for women and children. Despite producing most of the world's food, women and girls often eat last and least. Currently, nearly 4 in 10 women are experiencing moderate to severe food insecurity. Eliminating gender inequality in agriculture alone would feed 150 million more people. By increasing women farmers' access to training, financing, and agricultural inputs, their productivity would increase by up to 30%.

Feed the Future, the flagship U.S. global food security program, has helped more than 23 million people out of poverty and improved food security for millions since its launch in 2010. The original GFSA passed in 2016 authorized Feed the Future and called for development of the Global Food Security Strategy, a comprehensive plan that coordinates effective and sustainable programming to tackle hunger, poverty, and build on what we know works, including investments in women and small-scale farmers.

Congress must reauthorize Feed the Future to ensure the program's continuation under future presidential administrations and strengthen the program by increasing its focus on women small-scale farmers, and women's savings groups and collectives and expand Feed the Future's emphasis on malnutrition to include wasting (acute malnutrition) in addition to stunting (reduced growth and development). Lastly, the U.S. must continue to improve U.S. Government food security programming by coordinating a comprehensive strategy across agencies to address hunger.

We made history passing GFSA in 2016. I'm asking you to take a stand against global hunger and malnutrition and support reauthorization of the GFSA now.