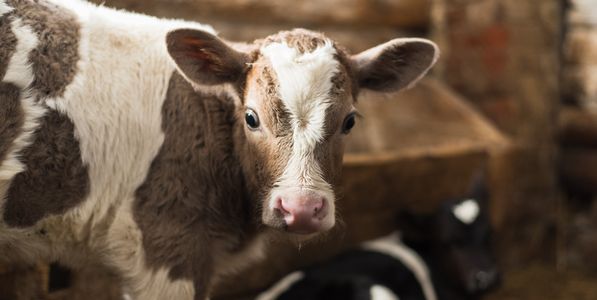 Animal welfare activists have once again raised the alarm about horrific abuses perpetrated by the U.S. animal farming sector -- an industry notorious for not only systematic violence against its animals, but also for covering up said violence.

This time, undercover activists went behind the scenes of an auctioneer facility called Erath County Dairy Sales (ECDS) in Texas and Dick Van Dam Dairy, a dairy farm in California. They found "aggressive animal abuse practices leading to heightened disease risk and cows being passed off as organic." Both undercover investigations have been brought to the United States Department of Agriculture (USDA), who are investigating. But in so many of these cases, abusers just get a slap on the wrist in the form of fines or other negligible punishments.

In Texas, ECDS employees were filmed kicking cows in their fragile heads and necks. Footage shows cows cowering and shaking, lying in puddles or in other dark corners of the facility, clearly suffering. One animal is already on the ground as it is shocked and jabbed with an electric prod. Animals that are dead or dying are carelessly, mercilessly heaped together.

In California, Dick Van Dam Dairy employees were filmed beating and jabbing cows with sharp, splintering wooden canes, battering them with metal pipes, kicking them in their soft udders, and twisting their tails to the point of breaking. Some of the cows udders were so battered and beaten from milking that their milk turned red with blood. Mother cows are forced to give birth just so their milk can be sold. At Dick Van Dam Dairy, their babies were allegedly discarded and left to rot.

And the abuses don't stop at the animals. ECDS employees were also ripping the ear tags from cows that arrived from out of state, using a bladed tool to slice it painfully from the poor animal's flesh. "Out-of-state cows come in, they turn into Texas cows when they leave," one person can be heard saying. This is because after slicing off their old tags, they glue new, forged tags onto their backs indicating that they are both from Texas (a lie) and organic -- another lie. These lies allow ECDS to charge much higher prices since organic labeling raises the value of meat. Even if you think you are doing the right thing, buying organically sourced and cruelty free meat, you could be inadvertently buying products steeped in cruelty.

Plus, when these animals' tags are removed and new, false ones assigned them, their medical history is abandoned. This opens up the horrifying possibility of disease unknowingly spreading. The irony here is that we are in the middle of a pandemic that was transmitted to humans from animals through consumption. To prevent another pandemic, biosecurity at U.S. animal farms needs to be airtight. ECDS simply doesn't hold up to those standards.

These instances are horrifying, but they are not the exception -- they are the rule. The U.S. animal agriculture industry is fraught with systemic negligence, exploitation, and abuse of its animals. If we want that to change, the USDA needs to investigate each and every transgression and dole out proportionate consequences.

Sign the petition and tell the USDA to charge those responsible at ECDS and Dick Van Dam Dairy with animal cruelty, and force these facilities to close their doors!