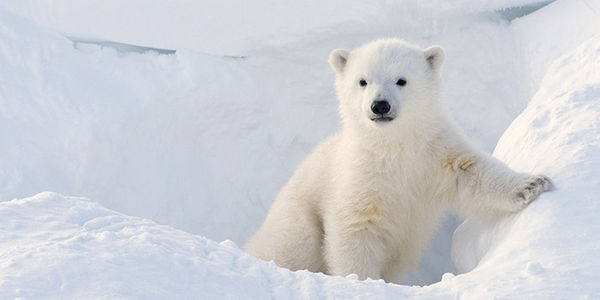 Polar bears depend upon habitat in the Coastal Plain of Alaska's Arctic National Wildlife Refuge to den and give birth to their cubs.

Now, some members of Congress are pushing a reckless plan to allow oil and gas drilling in this pristine wilderness—a move that would devastate denning areas and expose polar bears and other wildlife to more oil disasters.

There's no guarantee that drilling in the Refuge would yield the benefits that its supporters claim. But it is clear that drilling would destroy a pristine wilderness, home to polar bears and other remarkable wildlife like muskoxen and caribou.

It's time for Congress to take a stand against selling out a national treasure just to pay for a fraction of a tax cut for the wealthiest among us.

Drilling would have permanent impacts on the Refuge and all the wildlife that live there. In contrast, the revenues generated will be insignificant. The Arctic National Wildlife Refuge is a wildlife refuge first and foremost, not a petroleum reserve, and should be fully protected.

Urge your members of Congress to stand up for polar bears and their young by opposing oil and gas drilling in the Arctic National Wildlife Refuge. Please act now, before it's too late!
read petition letter ▾
Dear [Representative],

I urge you to stand up for polar bears, their young and all wildlife in the Arctic by opposing oil and gas drilling in the Arctic National Wildlife Refuge.

Alaska's northern coast is the most important area in the United States for denning polar bears where they birth and nurse cubs. Additionally, the Coastal Plain within the Arctic Refuge has both more denning bears and more available den habitat than the areas to its west on the central North Slope. Polar bears den in most of the Coastal Plain, and the bank habitat required for suitable dens of ice and snow, is widely distributed across the entire Coastal Plain in the Arctic Refuge. Land-based denning sites have become increasingly important. In the last two decades of the 20th century the proportion of polar bear denning sites along Alaska's northern coast increased from 37% to 62% as the availability of sea ice for denning has declined due to climate change. Since then, Arctic sea ice conditions have continued their long-term rapid decline, making land-based dens even more important.

Impacts of oil and gas development on the Coastal Plain would be widespread. Unlike at Prudhoe Bay, the Arctic Refuge Coastal Plain oil may be found in as many as 40 separate and much smaller oil fields scattered across the 2,300 square mile pristine Coastal Plain. It follows that the potential footprint of oil and gas exploration and development would be more widespread across the area than in Prudhoe Bay, and for less than half as much potential oil. The National Academies of Sciences reported major cumulative impacts of oil development on wildlife, the land, wilderness, and Alaska native cultures across an extensive area of the North Slope. Significant effects to wildlife, including polar bears, are expected to worsen as industry spreads to new areas.

The entire Arctic Refuge, including the Coastal Plain, should be protected and designated as wilderness--the highest level of conservation protection on Earth.

As your constituent, I am calling on you now to oppose opening up the Arctic National Wildlife Refuge to any type of oil and gas exploration and drilling.