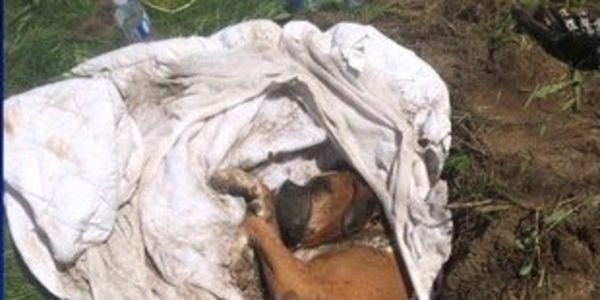 Demand Maximum Sentence for Animal Abuser Who Beat a Dog and Buried It Alive in the Monteregie, Quebec

On May 23rd, a man went out walking in a field in Quebec, Canada. When he heard a whimpering noise, he began looking around until he found a dog paw sticking up out of the ground, and the earth around it moving. He uncovered the dog, who was still breathing and called the authorities. Local veterinarians inspected the dog and discovered that he had probably been strangled and hit with a blunt object, before being buried alive in a shallow grave and left for dead.

Vets tried to nurse him back to health and at first it looked like he would recover. They even gave him nicknames — Earthquake and Sugar Ray. But then he suffered a seizure and a heart attack, and he passed away a day after he was found.

The next day, a man in his 40s turned himself in to the police, and it appears likely he will be charged with animal cruelty. Animal cruelty is a criminal offense that carries with it the possibility of jail time. But we must ensure that he is truly brought to justice. Sign the petition now to demand justice for Earthquake!

A man in his 40s has turned himself in to local police in connection with the dog found beaten and buried alive in the Monteregie.

The dog was discovered Tuesday in a field in Saint-Paul-d'Abbotsford and was taken in to the care of veterinarians and the SPCA Monteregie.

Though the animal initially showed signs its condition was improving, by Wednesday afternoon, it suffered a seizure and heart attack and died.

The dog, a boxer, had been discovered in a shallow grave and the SPCA said they believe it had been hit with a blunt object before it was left for dead.
Related Stories

The SQ said the man turned himself in to the police station in Rouville, which oversees Saint-Paul-d'Abbotsford.

The man, who is from the area, was questioned by police and has been released for now on a promise to appear in court.

"This individual has been released and could subsequently be issued a summons to appear," explained SQ Sgt. Claude Denis.

He may be charged with animal cruelty.

Animal cruelty is a criminal offence, and a conviction comes with a possibility of up to five years behind bars.

No court date has been set and police say the investigation continues.

Investigators are waiting for further information from the necropsy. They will then present all the evidence to the Crown, who will decide what, if any, charges will be laid, said SQ spokesperson Ingrid Asselin.

As is customary in criminal matters, the identity of the suspect will not be made public unless charges are laid.

Meantime, the SPCA Monteregie said it has received donations, as well as people calling in to cover the cost of cremating the dog.

Care2
Demand Maximum Sentence for Animal Abuser Who Beat a Dog and Buried It Alive in the Monteregie, Quebec
SHARETWEET