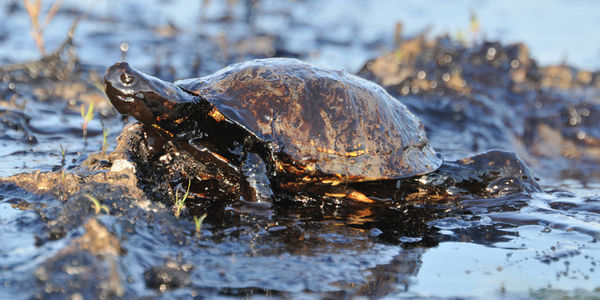 The Gulf is filled with iconic endangered species, yet the EPA is letting fracking rigs dump poisonous waste into the water

The Gulf of Mexico waters are a rich, abundant ecosystem, filled with some of the most iconic species we associate with the ocean: humpback and killer whales, bottlenose dolphins, manatees, bull and tiger sharks, as well as five species of turtles. Corals grow in these beautiful waters, fostering life-giving feeding grounds for millions of fish. Pelicans, gulls, egrets, and more soar above the surface, searching for their next meal or simply en route to their next migration point. Many of these species are also endangered or threatened, meaning they need our protection now.

Yet the Gulf of Mexico is also increasingly home to toxic hydraulic fracturing ("fracking") operations, with upwards of 3,000 fracks occurring in the past 10 years. But it isn't just about the fracking itself. Along with this oil and gas extraction has come 66.3 million gallons of fracking waste, which has all been dumped straight into the Gulf waters, poisoning these animals' important home.

Sign the petition to demand a ban on all fracking operations in and around the Gulf of Mexico!

Since 2010, instances of fracking have increased in frequency — now, it is an almost daily fact of life. Expert reports have discovered that each such instance of fracking releases 21,480 gallons of fracking-associated waste into the Gulf, including explicitly toxic poisons such as biocides, as well as polymers and solvents.

What does this massive and near-constant release of chemicals into the environment mean for us? Unfortunately, neither the government nor other researchers have managed to study the health implications of approximately 75% of the chemicals used in hydraulic fracturing, so much of this is a giant, frightening mystery. However, of the 25% of chemicals we do know about, many are directly linked to various types of cancer, neurotoxicity, damage to reproductive organs, and also death.

Despite all of this — the dangers we do know about, and the dangers that are still un-studied — the U.S. Environmental Protection Agency (EPA) has refused to limit the amount of fracking wastewater that these corporations may discharge into Gulf waters.

This means all of us who consume or live in water — and that means humans as well as animals — are being inundated with deadly chemicals, and so far there is no government agency acting as a check on this recklessness.

The risks from fracking are just too great. We must save these wildlife species as well as our own health now! Demand that the EPA ban fossil fuel corporations from releasing fracking waste into any type of waterways, and tell the governments of the U.S. and Mexico to ban all hydraulic fracturing operations in the Gulf of Mexico!
Sign Petition
SHAREShare With FriendsTWEETEMAILEMBED
Sign Petition
See more petitions:
You have JavaScript disabled. Without it, our site might not function properly.

Care2
The Gulf is filled with iconic endangered species, yet the EPA is letting fracking rigs dump poisonous waste into the water
SHARETWEET