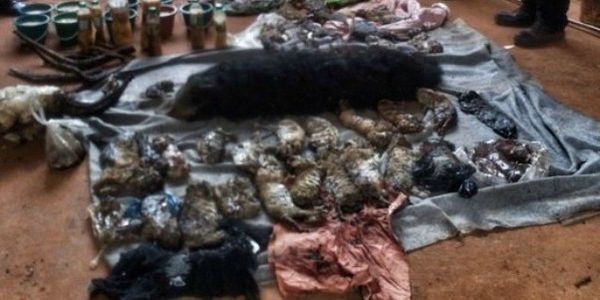 For over a decade, a Thai zoo posing as a sanctuary and Buddhist temple has been illegally breeding, brutalizing and selling tigers on the black market. Last week, the Tiger Temple was finally raided by the Thai government and 40 dead tiger cubs were found in a freezer. The 137 living tigers found in the raid  have been temporarily removed. But obviously, this temple should not have access to tigers at all. Add your name to tell the Thai government to ensure no tigers be returned to the Tiger Temple.

Earlier this year an investigation found that the tigers at Tiger Temple live awful lives. Former workers at the temple confirmed that tigers are forced into tiny concrete enclosures for 20 hours a day, only to be sedated and brought out to pose with tourists for the other 4 hours with no shade or water. Tourists can pay big bucks to walk the tigers, lay with them and help feed them. Former workers also confirmed that in addition to sedation, the tigers are also beaten into submission and taunted by the monks that run the place.

The baby cubs that are illegally bred at the temple are often passed through Laos and sold on the black market. These cubs are torn from their mothers years too early and both mother and cub suffer severe physical and mental trauma as a result. Due to the heinous living conditions and psychological trauma the tigers live in, each year at least a few of them lash out at visitors.

But that's only the tigers who actually live there. What's more horrifying is that tigers from Tiger Temple are being illegally sold to China for high-end beauty products, home decor, and other status symbol products. It's likely that the 40 dead tiger cubs found in this week's raid were to meet this fate, too. Besides the 40 dead tiger cubs, various other wild animal body parts were found frozen at the Temple too. It appears both can be sold on the black market at a high profit.

This inhumane zoo posing as a sanctuary is sickening. Thailand is supposedly a country that leads in tiger conservation efforts, but the fact that the remaining living tigers could go right back to this abusive situation makes that unbelievable, to say the least.

Act now before 137 tigers are sent back to a miserable life of psychological and physical torture. Sign the petition today to urge Thai officials to send the tigers to an actual sanctuary.
Sign Petition
SHAREShare this petition with friends!TWEETEMAILEMBED
Sign Petition
See more petitions:
You have JavaScript disabled. Without it, our site might not function properly.