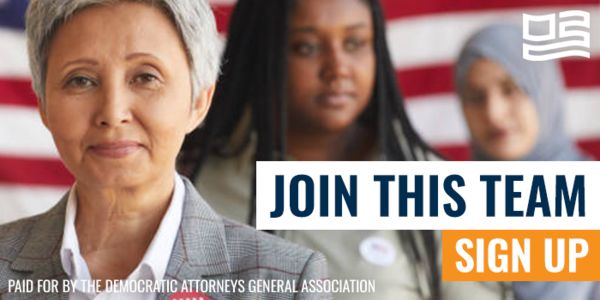 Do you know who fights on your behalf when your healthcare is threatened, when your employer exploits your labor, or when radical state legislatures try to suppress your right to vote en-masse?

It's Democratic Attorneys General. They're a group of the most effective, diverse elected officials in the country, serving as vigilant watchdogs against injustice and inequity everyday – and they're the first on the front lines when our rights are under attack.

Dem AGs need a powerful grassroots network behind them as they go to bat for our rights and ward off right-wing aggression. Add your name now to support their urgent work.

Dem AGs have been busy lately.  As their GOP counterparts tried to overturn the election, foment insurrection at the Capitol, and dismantle the Affordable Care Act (and our entire health care system as we know it!) during a global pandemic, Dem AGs have been out in full-force to stop them in their tracks.

Because when public officials misuse their power – to suppress our rights, to keep our community members down – Dem AGs are first on the scene. And with countless Trump lackeys still in office in states across our nation, advancing hatred and blocking progress at every turn, we need strong Dem AGs to continue to hold the line for us.

If you're feeling fired up to fight for justice and fairness with them, add your name right now. The more people backing their critical work, the better.