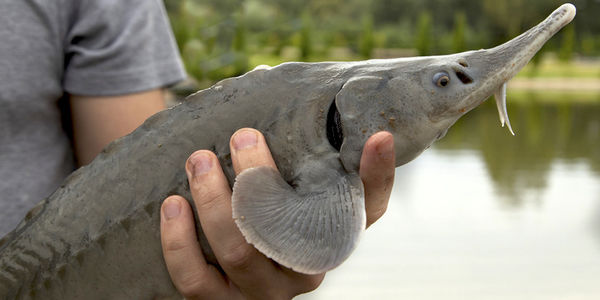 Caviar is a delicacy served on dinner plates all over the world, but since it looks like little small balls of tiny tapioca, people often don't realize how much ecological devastation it can cause — when not caught, produced, and sold responsibly. Caviar is composed of fish eggs from one particular type of fish: sturgeon.

And sturgeon are one of the most critically endangered fish in the ocean. Yet some international authorities that should care a lot about stepping in to help protect this increasingly endangered fish don't seem too worried.

Sign the petition to demand that Convention on International Trade in Endangered Species of Wild Fauna and Flora (CITES) finally adds some enforcement mechanisms to their international fishing regulations!

Technically, CITES has implemented restrictions on caviar sales, and fishermen as well as marketers are supposed to comply with these regulations. But often, those rules are viewed as mere inconveniences and ignorable guidelines that those in the industry simply sidestep. In addition to suppliers sometimes sharing incorrect information (i.e. lying), they also often just blatantly sell illegally-poached fish.

For example, researchers at the World Wildlife Fund (WWF) have found that significant proportions of sturgeon and caviar sales were, in fact, illegally caught and sold — perhaps as high as 33%.

This isn't just bad for the fish or for our dinner plates. It's also bad for the legal fishers!

Tell CITES it needs to beef up its regulations and work with governments around the world to help crack down on illegal sturgeon fishing!
Sign Petition
SHAREShare With FriendsTWEETEMAILEMBED
Sign Petition
See more petitions:
You have JavaScript disabled. Without it, our site might not function properly.