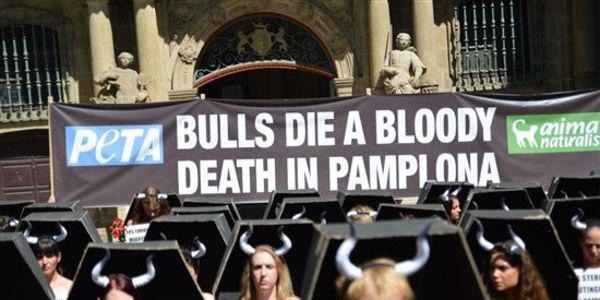 Say NO to bloody Sanfermines!!!!!!

Probably you all have heard of San Fermin, the Spanish tradition that Hemingway idolized in his books. This 'celebration' attracts thousands of tourists every year but very few of them know what really happens during that bloody week. All the bulls that run in the streets of Pamplona during the "encierros" from 7th to 14th July, are killed that same evening in a bullfight on behalf of the saint San Fermin.

The bulls are bred in fields and aren't accustomed to the noise and crowds of people. Once opened the pens, they are forced to run by electric shocks and screams, and in order to "attack" and run speedly are beaten and harassed by the "corridors", which usually carry newspapers for this purpose. The corners of the streets of Pamplona are very closed, and animals tend to slip and fall, hitting the walls or barriers of restraint, twisting members and possibly hurting each other when they fall together. This, in addition to the injuries that can cause to the riders that also fall on the streets.

All the bulls that run in the morning in Pamplona, go directly to a terrible death in bullfights held in the afternoon in the Plaza de Toros, where they are locked up in the morning.

Most visitors of the plaza are tourists who have never seen a bullfight before, and once out, most of them do not want to see one again. Bullfights are repulsive, bloody, and sad for their cruelty to animals.

One of the most important supporters of bullfights is the tourist industry. Travel agents and promoters of bullfighting or the bullrings, sell the bullfight as a fair show, a cultural festival. But what that doesn't reveal is that the bull never has the option to defend against the weapons of torture of the torero and his gang of armed men.

Bulls are intentionally debilitated in various ways, such as lack of food and confinement in a dark enclosure. The use of drugs in animals is also common.

In a normal bullfight, the bull enters the arena and is haunted by the "picador" -a horseman who rides a horse blindfolded-, that plunges a spear into the base of the spine of the bull, in the neck muscles. This affects the ability of the bull to lift his head and begins to bleed with the rotation movement and cutting of the spear. Then, "banderilleros" come up and distract the bull and jump his side, sticking "banderillas" -sticks with a harpoon in the tip- which are spiked in the back of the bull. When the bull begins to feel weak from lack of blood, the banderilleros dizzy him, rounding in circles. Finally, the matador appears, provoking the attack of the exhausted bull. Then, when he's exhausted and barely breathing, the matador kills him burying a 80 cm. sword in the chest. If  this fails, another man enters to stab the exhausted animal to death. The dagger ("descabello") is supposed to cut the spinal cord of the animal, but it is usual to fail, leaving the bull conscious but paralyzed while is chained by the horns and dragged out of the bullring.

If the public is satisfied with the "slaughter of the matador", then he cuts the bull's ears and/or the tail, and the matador receives them as a trophy. A few minutes later, another bull enters the bullring alive, so the cycle of sadism and blood begins again. Six bulls killed on each day of "fiesta."

Bullfights are cowards. The matador has the choice to be there, but the bull doesn't. From the moment that they enter into the bullring, the bulls have no choice nor escape from this cruel death. First it was weakened by hunger, then they cut the muscles of his neck, begins to bleed, finally drowned in his own blood by the sword.

Opposition to bullfights can be found in Spain and around the world. In April 2004, the Mayor of Barcelona declares it anti-bullfighting city in an effort to ban this bloody struggle. Since then, 38 Catalan municipalities have followed the motion, and the Catalan Parliament is debating a bill to expand the existing animal anti-cruelty law, to protect the bulls. According to the Gallup poll in October 2006, 72% percent of Spanish show no interest in bullfights, more than the 54% who enjoyed it in the '80s. If Spain wants to increase the number of tourists, and if they want to be a modern and progressive country, they need to stop this senseless slaughter and cruel killing of animals for entertainment.

San Fermin may sound very appealing at travel agencies. Young people, on the other hand, might simply be attracted by its 'wild nights', but please,  take all this information into consideration. Our only weapon is boycott. The San Fermines depend on OUR MONEY. Please, sign this petition and say NO to this seven days of shame for Spain. Share this information with all the people you know. The world needs to know!!!

If you really want to stop this madness, please:

* Send a letter to the Council of Pamplona  pamplona@pamplona.es

Thank you for your time! :)