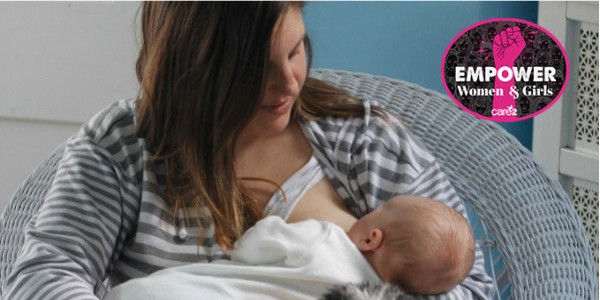 I am a working mom with a 2-year-old. When my son was born, my husband was in medical school, which means that my family depended solely on my paycheck for survival. I am one of the lucky women in the US whose job is covered under the Family and Medical Leave Act (FMLA), which means that I could take 12 weeks off of work without pay after my son was born without fear of losing my job.

I am also very lucky to have an employer that paid ⅔ of my salary for six weeks of my maternity leave. But even though I am one of the "lucky" ones, and I was even able to put some savings aside before I went on maternity leave, my family is still recovering financially from not having a salary during a time when we also had a huge hospital bill to pay for my son's time spent in the NICU.

Just like me, most American families cannot afford to give up three months of salary, especially when they are absorbing hospital costs and the day-to-day costs of a new family member. That is why I am calling on Congress to pass a federal paid parental leave (PPL) bill that would allow new moms and dads to take care of their newborns without worrying that they will go broke.

PPL may seem novel in the United States (currently only 12% of employers offer PPL to employees), but it's common sense for the rest of the world. In fact, the US is one of only two countries that doesn't guarantee paid time off for new mothers — the other is Papua New Guinea.

Opponents of PPL say it's too expensive. But in reality, not guaranteeing paid leave to new moms and dads is the real costly decision. According to a host of studies, paid parental leave fosters higher employee retention, quickens new mothers' return to the workforce, and reduces infant mortality rates. This should be a no-brainer.

I would like to have a second child someday, but my family can't afford to be without my full paycheck for 12 weeks again. Without fully paid parental leave, I would have to go back to work before I have physically healed from giving birth and before I am emotionally ready to leave my newborn in the care of a stranger. And I'm one of the "lucky" ones.

Sign this petition to demand that the US Congress passes legislation that would allow new moms and dads not to have to choose between taking care of their newborn baby and being able to remain financially stable.
Sign Petition
SHAREShare With FriendsTWEETEMAILEMBED
Sign Petition
See more petitions:
You have JavaScript disabled. Without it, our site might not function properly.