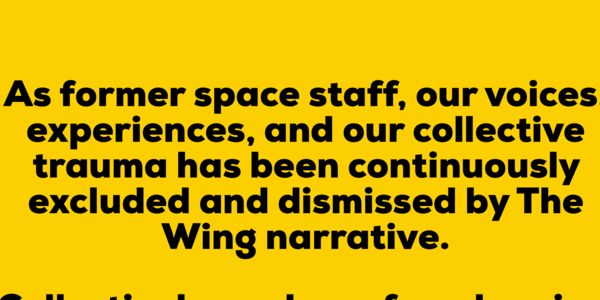 Demand for Real Change at The Wing

The Wing is a women-focused, co-working space collective and club founded in 2016 by Audrey Gelman and Lauren Kassan. It was built on the idea and advertised as being a "safe and inclusive space for the advancement of all women and non-binary individuals" and we have continuously seen the exact opposite of this mission.

As former space staff, our experiences, and our collective trauma has been continously excluded and dismissed by the Wing narrative. Collectively, we have faced racism and anti-LGBTQIA rhetoric, from management, HQ staff, and members. We have faced physical and pyshcological violence within the various Wing locations, and discrimination when attempting to move up within the company.

On June 11th, the Furloughed HQ staff of The Wing staged an online walk out in protest. No one from the HQ team reached out to the former space staff about our feelings or thoughts. This is another look at the constant disconnect within The Wing. We have come together for our voices to finally be heard, LOUDLY.

In response to our protest, one of the founders, Audrey Gelman stepped down. The Wing also donated $100,000 dollars for a GoFundMe to help laid off staff, but did not prioritize the space staff - the lowest paid group - in disbursement. They also donated $200,000 to Black Lives Matter causes, while ignoring the years of racial discrimination that has gone on in their space. As such, these actions are not nearly enough. Here are our demands:

1. We ask for our NDAs to be lifted immediately.

2. We ask for co-founder and COO Lauren Kassan to step down and resign from her title at The Wing.

3. We ask for The Wing to match the donations already made for a total of $300,000 ($100,000 for the GoFundMe that did not prioritize space staff and $200,000 for donation made to BLM ) and donate it to laid off staff prioritizing the part-time space staff first.

4. We ask for the removal of Marianna Martinelli and Frenchie Ferenczi for their lack of leadership and support of the part time team, as well as continuously mis-identifying the GNO and Non-binary staff members across multiple locations.

5. We ask for a grant to be allocated and dispersed across the entire former space staff for the now 12 locations dedicated to mental health for those who have had to seek professional therapy because of the mistreatment.

For more information and untold stories by Wing staff and members, please follow us on social media.

Care2
Demand for Real Change at The Wing
SHARETWEET