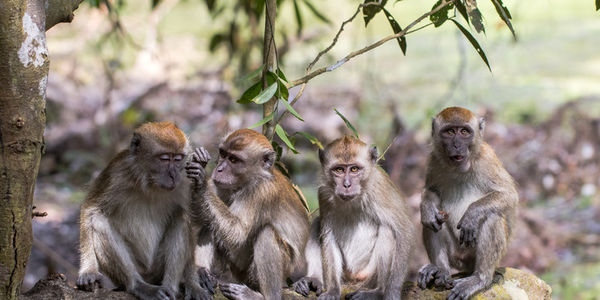 Imports of Monkeys for Laboratory Testing in the UK Has Tripled This Year!

Primates are our closest relatives and yet, we insist on harming them by using them for cruel experimentation for no good reason. Right now, Britain has a sneaky way of doing this while acting like they don't: they say wild primates can only be imported to be pets, but that their captive offspring can be imported for testing. So because they are babies born in captivity, they are eligible for torture. If this doesn't make any sense to you, you're not alone.

In the last year, official records show about 6,700 primates -- specifically long-tailed macaques -- were imported from Vietnam and Mauritius. But activists say those numbers don't count all the primates that are bred within the EU for testing purposes, making the actual number likely much higher.

Apparently, most of the testing done on these animals was for toxicity of chemicals or drugs. This involves exposing them to toxic chemicals and drugs at higher and higher doses until the poor animal gets sick or dies so these producers know the lethal limits of their products. .. The terrified monkeys are restrained and injected with drugs or force fed toxic chemicals through a tube. This is torture that no living being should be subjected to.

Beyond the obvious heinous animal abuse, bringing primates out of the wild and into captivity also poses a real public health risk, as many diseases can easily move from primates to humans. We are already in the middle of a pandemic that is thought to have originated in animals.We absolutely do not need another one on our hands, but that's the fate these people are testing. Diseases transmitted from animals to humans include yellow fever, Ebola, monkeypox and others that we don't know about yet.

In many cases, we have technology that means we don't need to test on animals, so why are people still insistent on these cruel methods? It's bad for the animals and it's bad for people. We need to pressure the UK to end the import of primates for research NOW!
Sign Petition
SHAREShare this petition with friends!TWEETEMAILEMBED
Sign Petition
See more petitions:
You have JavaScript disabled. Without it, our site might not function properly.

Care2
Imports of Monkeys for Laboratory Testing in the UK Has Tripled This Year!
SHARETWEET