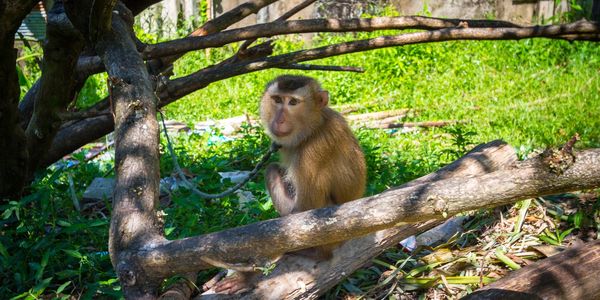 Forced monkey labor is horrifyingly cruel, and Walmart is openly supporting it

Monkeys are highly intelligent, emotionally developed, and social creatures. They may sound a lot like humans to you because they are, in fact, part of our family tree. But apparently, for some humans, blood is not thicker than water -- coconut water, that is.

A recent investigation by PETA discovered that Theppadungporn Coconut Co., manufacturer of Chaokoh coconut water, milk, and other products, is exploiting innocent monkeys, forcing them to harvest coconuts while subjecting them to countless cruelties at their farms.

In response to the gut wrenching evidence, Costco did the right thing and immediately stopped carrying Chaokoh products. Let's tell Walmart, a major player with almost 4 times the revenue of Costco, to follow suit!

Sign the petition to demand that Walmart condemn animal cruelty and exploitation, and immediately cut ties with Chaokoh!

PETA's Asia division dispatched investigators to farms and facilities used by Theppadungporn Coconut Co. in Thailand, and what they saw was so bad that they called for all retailers to drop their products at once. Monkeys "treated like coconut-picking machines" were forced to perform a warped version of their instinctive behaviors over, and over, and over again, climbing trees and harvesting coconuts for hours without any relief or reward. In the wild, monkeys would gather as much food as they and their communities needed. This monotonous, unnatural labor takes a psychological and physical toll on the innocent creatures.

But when the mental and bodily stress becomes too much, the monkeys are punished furthermore. A farmer at one of the Theppadungporn properties had no problem divulging that when the monkeys became unruly from overwhelming fear and stress, handlers sometimes choose to rip their teeth out of their mouths so that they cannot defend themselves.

Every hour of these monkeys' lives are misery. When they are not performing forced labor for Theppadungporn's economic gain, the sweet creatures are crammed into tight cages so small that they cannot move, or chained to heavy objects without access to food, water, or shelter.

Is coconut milk worth all this cruelty? You may not think so, but Walmart certainly does. While Costco responded to PETA's report by dropping Chaokoh entirely, Walmart's response was shameful, vague, and promised zero actual change. While spouting buzzwords and fancy phrases like "sourcing responsibly" and "corrective action," the company chose to ignore where its true power lies -- in its deep pockets.

If Walmart truly "will not tolerate animal abuse of any kind," let's ask them to prove it. Sign the petition and demand that Walmart, the United States' largest retailer, put its money where its mouth is and drop all Chaokoh products immediately!