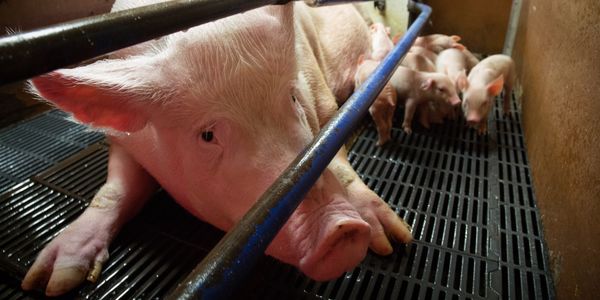 Factory farms are a nightmare for everyone involved, from the animals housed there to the humans who work there. Chickens, pigs, and other animals are packed into tightly crowded barns and raised with minimal contact or affection. The sole goal is to fatten them up for market as quickly as possible with minimal "losses," a clinical way to describe dead, downed, and ill animals.

Close conditions promote aggressive behaviors, foster the spread of disease, and lead workers to engage in cruel activities like debeaking chickens to reduce aggression. They also generate extremely large volumes of waste — before the storm, many were very worried about the manure lagoons where pig feces are stored, fearing (correctly) that they would rupture in floodwaters. The stench of factory farms can be unbearable, and the state legislature just passed a law making it harder for neighbors to take legal action.

For workers, being on a factory farm involves long, grueling hours with few employment protections, for extremely low pay. The money from the sales of animals at market doesn't end up in the pockets of farmers, for the most part. It goes to the multinational companies they work for, like Pilgrim's Pride and Foster Farms. Meanwhile, farmers may incur substantial debt as they make outlays of cash to invest in farming operations, running a risk of losing their farms if things go wrong.

And then there's the devastation that occurs during hurricane season. Flooding of factory farms is a known issue during hurricanes, so some farmers try to evacuate livestock from low-lying areas. But they can't move all their stock, and as a result, animals are left to drown in the waters. That's not all, though. Some animals survive, but their farms are cut off from roads, making it difficult to supply them with food, water, and other needs, with farmers fearing that their livestock may die before they can reach them.

We know that factory farms are bad for animals, bad for humans, and bad for the environment. And while some states have begun to pass legislation that covers specific aspects of factory farming cruelty — like laws mandating more space for laying hens or banning inhumane "gestation crates" for pigs — we need to think bigger.

What if we banned factory farming altogether, insisting on more humane conditions for farm animals and humans alike?

Tell the industry that we're tired of the animal, environmental, and human costs of factory farming. It's time for a meaningful alternative, and no more mass farm animal deaths in natural disasters.