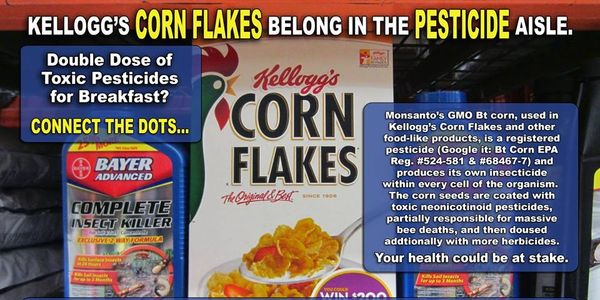 Kellogg's: Remove GMOs from your products! We sent a box of Froot Loops to a lab for genetic testing and found 100% of the corn was GMO, containing both Roundup Ready and Bt corn as well as some Roundup Ready soy. Sugar is also a Roundup Ready GMO. Roundup Ready means the GMOs are sprayed with Roundup (glyphosate), a toxic weed killer, which is absorbed by the plant. We followed up and sent Froot Loops to a toxicology lab to test for glyphosate residue. The lab documented a level of glyphosate residue in Froot Loops that gives significant reason for concern. Glyphosate was also patented by Monsanto as an antibiotic in 2010. Not only is the corn in Froot Loops sprayed with Roundup, but with the Bt trait, it is a pesticide in its own right, registered with and regulated by the EPA. Every cell of the Bt corn plant produces pesticides called Bt toxins. When rootworms bite into it, their stomachs rupture and they die. How disturbing is it that Kellogg’s is feeding children pesticides & antibiotics, without their parents’ knowledge or consent? Read the full report on Froot Loops here: http://www.gmofreeusa.org/food-testing/kelloggs/kelloggs-froot-loops/

GMOs (genetically modified organisms) were released into our food supply without independent long-term studies to prove that they are safe. The FDA doesn't oversee the nature or extent of testing these GMOs undergo. Instead, they allow the chemical companies that develop GMOs and profit from their sale to determine whether they are safe. The companies that create GMOs (Monsanto, Dow, Syngenta & others) are the same companies that created DDT and Agent Orange, now banned, and which cause serious generational disease and birth defects. There are increasing numbers of independent studies showing that GMO crops and the toxic pesticides associated with GMOs can have negative multi-generational human health and environmental consequences.

Kellogg's spent $1,012,552 on media propaganda in California & Washington, and another $750,000 in Colorado and Oregon to defeat voter ballot initiatives that would have required the labeling of GMO foods. During 2013-2014, Kellogg's spent $3.6 million on Anti-labeling lobbying. Kellogg's doesn't want Americans to know that their products contain pesticide producing, Roundup soaked GMOs.

America wants you to make ALL Kellogg's products GMO-free, like you do in Europe and countries that require GMOs to be labeled. We want accountability by third party verification. Kellogg's: Remove GMOs!

Kellogg's: Stop using GMOs in ALL of your products!

GMOs were released into our food supply without independent long-term studies to prove that they are safe for human consumption or the environment. The FDA does not oversee the nature or extent of the testing these GMOs undergo. Instead, they allow the companies that develop GMOs and profit from their sale to determine whether they are safe. In fact, scientific evidence has shown that GMOs, and the toxic herbicides they are engineered to resist, are linked to serious chronic health and environmental problems.

Stop funding efforts to prevent mandatory GMO labeling. America wants to eat the same products you sell in Europe and other countries around the world that require GMOs to be labeled. We want Kellogg's to be GMO free in America and we want accountability by third party verification. Kellogg's, remove GMOs!