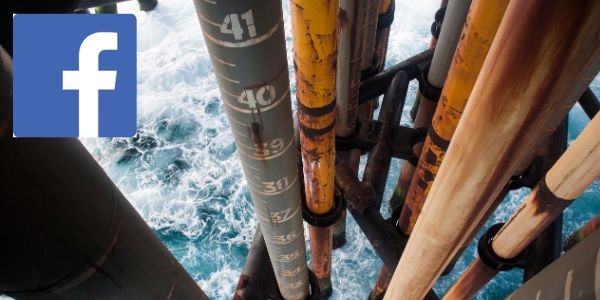 Facebook Abandoned Massive Amounts of Drilling Fluid and Equipment in the Ocean!

Since April 28, 2020, broken drilling equipment -- as well as 6,500 gallons of bore gel and broken piping -- has been hanging out off the Oregon coast in the ocean, harming the local habitat and environment and posing an accident just waiting to happen. Why, you may ask? Because of Facebook.

In order to create a high speed fiber optic cable called the Jupiter Cable to connect Japan and the Philippines with the United States,  their subsidiary Edge Cable Holdings was using -- of all things -- a fracking technique. But while trying, the drill snapped and broke, making a massive mess. Instead of cleaning it all up, they just left all the equipment and waste there!

It's absolutely unacceptable that Facebook thinks, because they are a massive company, they can just leave their gross equipment in the ocean where it's harming the local ecosystem. They are claiming there is no harm in leaving it there, but environmental experts say the opposite. Not only did they screw up, but they didn't even bother telling the proper agencies about it or do anything to clean up. As of this writing in August 2020 -- almost four full months later -- the waste is still languishing in the ocean and Facebook doesn't seem to care.

This is exactly the kind of mess that opponents of the Jupiter Cable feared and now they've been proven right. The bore gel used in the fracking process is now living beneath the ocean, and could begin leaking at any time. We all know that leaks during these types of projects are practically inevitable and the longer the 6,500 gallons of bore gel just hang out under the sea, the more chances for them to leak and destroy the local habitat.

The state of Oregon is doing what it can to try to force the gigantic corporation to clean it up, but so far nothing has happened. That's why we need public pressure to demand Facebook use their deep pockets to fix this hazard immediately and prevent it from happening ever again by stopping this project. If they can't do it safely for the environment, they shouldn't do it at all.

Luckily, Oregon could actually revoke Facebook's permits at any time to prevent further damage. Local organizations like Oregon Coast Alliance and Surfrider have spoken out about how careless Facebook is obviously being. With all of our voices raised together, we have a real chance to stop this fiasco before it's too late.
Sign Petition
SHAREShare this petition with friends!TWEETEMAILEMBED
Sign Petition
See more petitions:
You have JavaScript disabled. Without it, our site might not function properly.