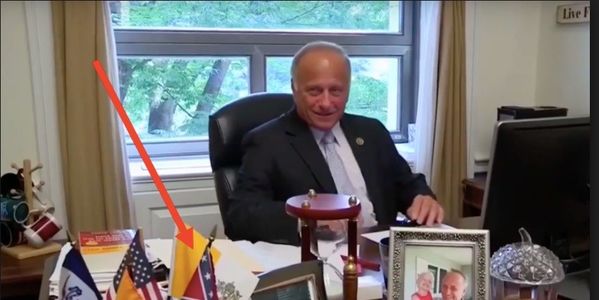 Rep. Steve King Is a White Supremacist, So Why Do These Companies Still Support Him?

What's the best-known secret in Washington? That Rep. Steve King is a racist.  A quick Google search will return dozens of the eight-term congressman's most offensive statements about minorities and white supremacy.

He's suggested that blacks "could afford abortions if they stopped buying iPhones," that the majority of Latino migrants are "hauling 75 pounds of marijuana across the desert," and that whites have contributed more to society and civilization than any other.

And those are just a tip of the iceberg. Steve King doesn't shy away from these statements, rather he spews his hate on broadcast television, in published interviews and on his Twitter feed. So if everyone knows that he is a white supremacist why do some of America's biggest companies continue to fund his campaign?

Some businesses have taken note of King's most recent rhetoric and done the right thing. Earlier this week, Intel announced that it would no longer donate to the congressman's reelection campaign. The tech giant told employees that after a review of his public statements they didn't believe the aligned with Intel values. And just two days ago, Land O'Lakes, also said they would no longer support his campaign.

Still, some of America's biggest companies continue to line his coffers. After doing a little digging, I discovered that my own cell phone service provider, AT&T is doing just that. I am not thrilled by the fact that the money I pay to AT&T is going towards helping a racist keep his seat. Another company, Berkshire Hathaway is also a King supporter. While you may not recognize the name, you will most certainly recognize their products which include Duracell, Fruit of the Loom and GEICO.

To me, by supporting King, they are sending a message that they agree with his platform — one of hate, ignorance and violence. If that is the case, I don't want anything to do with them and neither should you.

It is impossible for these multinationals to deny that they are unaware of King's views, so will they continue to support this bigot or will they take a page out of Intel's playbook and cut ties with this racist politician?

As an AT&T customer, I don't want the money I pay for my service to be wasted on hate. Sign the petition and tell AT&T and Berkshire Hathaway to stop supporting white supremacy. Tell them to end donations to Rep. Steve King's campaign.
Sign Petition
SHAREShare With FriendsTWEETEMAILEMBED
Sign Petition
See more petitions:
You have JavaScript disabled. Without it, our site might not function properly.

Care2
Rep. Steve King Is a White Supremacist, So Why Do These Companies Still Support Him?
SHARETWEET