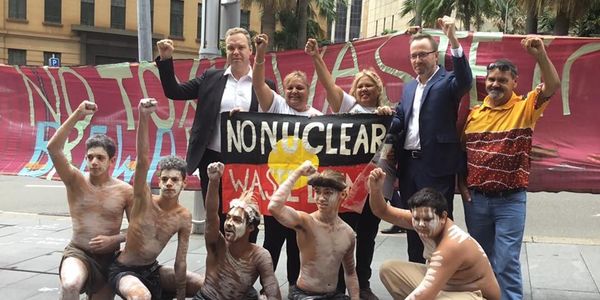 A property called Rosehill has been nominated as a Nuclear Waste Site in the Brewarrina Shire.

This property is black soil, it floods extensively when the Bokhara River is in flood and during dry times there is a lot of ground movement. This must not be approved.

The land is on the Burrabina and Murrawarri land, neither tribes have been consulted nor do they approve. The Ngemba tribe do not approve of the waste being transported through Ngemba land or within the Brewarrina Shire. Not Here, Not There, Not Anywhere.

Rosehill is in a rural and remote community to transport the nuclear waste it will have to travel through a lot of communities, it is over a 10hrs to get to there in a car, from Sydney, 11hrs from Brisbane, 12hrs from Melbourne, 14hrs from Adelaide, 40hrs from Perth, 36hrs from Darwin (the last three cities are on different time zones).

The nuclear waste will have to be transported by trucks, drivers stopping and resting in various communities along the route.

It is disappointing that the local Councillors and Council would even consider such an atrocity as a nuclear waste dump at Brewarrina.

If Nuclear waste was so safe why is it taken over 35years to find a site, why are they seeking to build in isolated communities with the majority of the population being Aboriginal?

Brewarrina is known worldwide for the oldest man-made structure in the world with Baiame's Ngunnhu Fish Traps and we want to keep it that way, not to be known as a nuclear waste facility.

A local Councillor has said "They are stopping us from accessing $31million".

We care for our communities, the land, the water and the environment, money is nothing compared to our health,  we learnt a hard lesson from the Cotton Industry, we will not tolerate the Nuclear Industry.

The local Council approached the Federal Government for this proposal without consultation with the community and without negotiation with the Local Land Council or the Ngemba Community Working Party or other local councils.

No Nuclear Bundabunda at Brewarrina - bad poison
Not Here, Not There, Not Anywhere
(please note; we still have 2 Councillors supporting our campaign to stop this nuclear waste site)