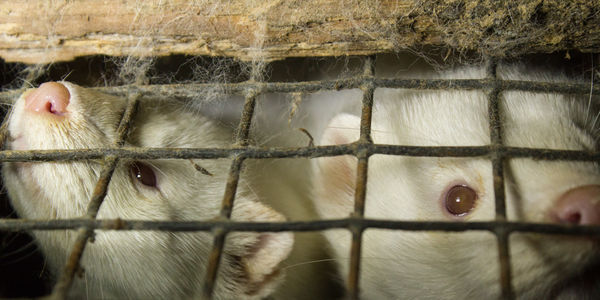 Why Do These Iconic Department Stores Still Sell Fur?

*UPDATE* We've got wonderful news! Nordstrom, Macy's, and Bloomingdales -- which are massive players in the high-end department store industry, have all announced that they will stop selling fur or exotic animal skin products, stating that the phase-out would be complete by the end of 2021. This is a huge win for animals, millions of which suffer and die every year in the cruel fur industry. But our fight is far from over, with Saks Fifth Ave, Neiman Marcus, and Dillard's still selling the bloody products. Keep signing and sharing the petition to tell them to follow Nordstom's lead and go fur free!

For a whopping $13,500 you can wow your friends with a new mink fur coat. Want something a little less extravagant? How about a fox fur vest for just a cool $900? Or perhaps you'd like to drape yourself in rabbit fur for a measly $2500? Though these are hefty prices, they are nothing compared to the ultimate price that millions of fur-bearing animals pay every year.

From raccoons to foxes, minks to chinchillas, these animals spend their entire lives stuffed in small cages, with zero human affection, often with open wounds and other maladies that cause them to suffer. That is until the fur farmer decides their day has come, and they are slaughtered.

The cruelty in the fur industry has prompted several jurisdictions around the country to ban fur altogether. Los Angeles and San Francisco have both passed fur bans recently. Now, New York is about to do the same. If passed it would hit fur farmers, fashion houses and retailers where it hurts most: in the pocketbook, since NY is a huge market.

But this law isn't guaranteed to pass. Meanwhile, fur products can still be sold in the Big Apple.

Some of them, like the garments mentioned in the first paragraph, can be found at Saks Fifth Avenue, Neiman Marcus, or Dillard's. These legendary department stores are New York staples for the well-to-do, but they are also some of the last remaining big-name retailers that continue to sell fur in their stores. Incredibly, some of their other high-end competition have decided to phase fur out -- so the pressure is on for these retailers to do the same.

For people who have more money than conscience, these department stores are the place to go to buy clothese made from dead animals. But that needs to change. Now that some of the largest fashion houses in the world, like Armani, Gucci, and Michael Kors have publicly pledged that they are going #furfree, it's time for these retailers to do the same.