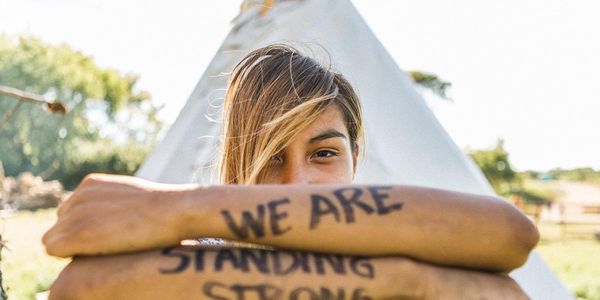 The company was supposed to halt construction on the Dakota Access Pipeline until a federal hearing, but they have taken matters into their own hands. Late Saturday afternoon they began bulldozing a sacred burial site. When protectors tried to stop them, adults and children alike were pepper-sprayed and attacked by dogs at the Standing Rock Sioux reservation by ETP security teams...and the construction continued.

Canine experts have said the handlers of the “attack dogs” were not trained in utilizing professional security dogs, and were encouraging violence from the dogs when force was clearly not warranted. Company representatives and local law enforcement have justified the attack by claiming that protectors were armed and on private property—but under the American Indian Religious Freedom Act of 1978, these Natives have a federally protected right to access their sacred sites and to use religious objects.

The local governments have turned a blind eye. No arrests have been made. This kind of aggression is inexcusable and cannot be tolerated.

We, the undersigned, believe that legal action must be taken against the attacking parties and the company that hired them. We believe that Energy Transfer Partners has violated the rule of law by advancing construction despite the court hearing, and that they have violated the American Indian Religious Freedom Act. We implore Governor Jack Dalrymple of North Dakota to allow local governments surrounding the Morton County area to step in to protect the protectors. Arrests and restraining orders must be made on those who attacked protectors, and by extension, on those who paid these teams to do it.

UPDATE: Friday afternoon, hours after a federal judge ignored the pleas of protesters around the world and allowed construction to continue, the Department of Justice, the Department of the Army, and the Department of the Interior released this statement: The Army will not authorize constructing the Dakota Access pipeline on Corps land bordering or under Lake Oahe until it can determine whether it will need to reconsider any of its previous decisions regarding the Lake Oahe site under the National Environmental Policy Act (NEPA) or other federal laws.  Therefore, construction of the pipeline on Army Corps land bordering or under Lake Oahe will not go forward at this time.

This is a small victory in a much larger fight, but we are all grateful for this rare turnaround from the federal government. Energy Transfer Partners should still be held accountable for their reckless aggression, and hopefully with your help we can bring these criminals to justice.