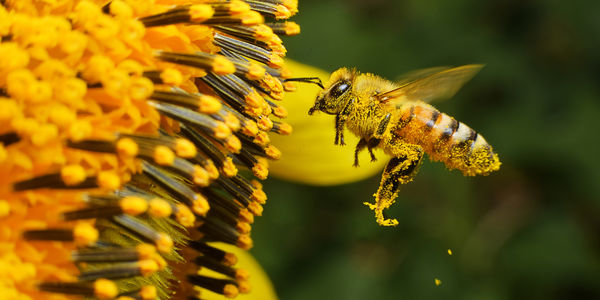 It's no secret that the world's bee population is in danger. Colonies all over the western world have disappeared overnight with no concrete singular answer as to why. But according to the Sierra Club, several factors may be at play including parasites that act as vectors for a fatal bee virus, poor nutrition, loss of habitat and finally pesticides.

And now, a new study suggests that an already controversial herbicide may also be threatening the honey bees' survival.

As explained in Science Magazine, the herbicide glyphosate — the world's most widely used and the active ingredient in household products like Roundup — works by blocking an enzyme not found in humans but used by plants and some bacteria. The study suggests that glyphosate damages the bacteria in their digestive system which makes them more susceptible to infection.

In one experiment, researchers exposed half of their bees to the herbicide via a sugar syrup, the other half had an untainted syrup. The bees were then exposed to a harmful bacteria commonly found in bee guts. Those that were fed glyphosate died at an alarmingly higher rate than those that weren't.

Before this latest research, glyphosate already had a dubious reputation. While chemical companies swear by its safety, governments and international organizations have raised several red flags. The World Health Organization, for example, has labeled it as a possible carcinogenic and the state of California now requires warning labels on any product that contains it.

Now there is yet one more reason to be skeptical of the chemical — it could be killing our bees. In recent years, almost a third of American hives have failed, more than twice the historic rate.

It is crucial that we do everything we can to mitigate this dangerous trend and keep possible threats to the honeybees' survival out of the environment. Threats like glyphosate. Unfortunately, chances are that you've got some of it in your garage. Glyphosate is as easy to get as going to your local retailer.

That's why Care2 is asking Home Depot, America's largest home improvement store, to help keep this dangerous chemical out of our environment by taking it off their shelves.

If you too are worried about the fate of America's bees and the health of our environment, please join us and sign this petition.
Sign Petition
SHAREShare this petition with friends!TWEETEMAILEMBED
Sign Petition
See more petitions:
You have JavaScript disabled. Without it, our site might not function properly.