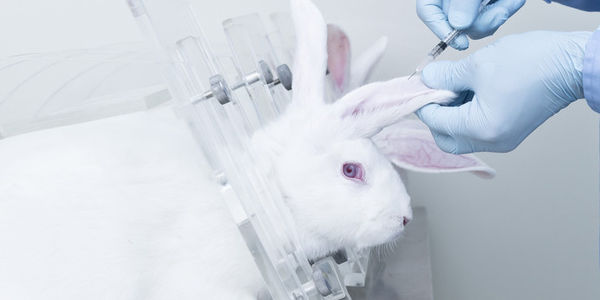 The UK might start forcing companies to test on animals! Speak out for the animals now!

For 23 years, lawmakers in the UK have protected animals from cruel and needless experiments, performed on them all for the sake of beauty products. Now, this protection could be coming to an end.

In fact, even worse, the British government is now considering actually mandating animal testing — meaning companies would have no choice but to torture small creatures in order to sell their products in Britain!

Sign the petition to demand that the UK government stand firm on animal rights and continue to prohibit animal testing for cosmetics!

By now, there are NUMEROUS ways to test the safety and effectiveness of a cosmetic product — including many ways that do not involve animals. But the European Chemicals Agency recently stated that it disagrees with these other methods, and believes that animal testing is necessary in order to prove that merchandise is safe for human use.

This is patently false. Scientists have already developed multiple other processes for determining the safety level of make-up, lotion, and other cosmetics — and companies around the world have been using these for years. Some research has even suggested that animal testing is a very poor measure of a substance's toxicity in humans, since animals and humans often react quite differently. This has already led to many cases of harm coming to humans as a result of animal testing inducing a false belief in a product's safety.

But members of the British government have indicated that they are willing to side with the European Chemicals Agency and plan to start requiring tests on animals. If such a policy were to go through, it would be devastating for many laboratory critters.

Animal testing is a brutal industry, plain and simple. Living beings are used, against their will, in these trials and experiments. They are locked up and their fur is shaved down to expose bare skin, where chemicals are rubbed on their bodies to see how bad the reaction is. Their eyelids are held open and substances are pasted directly onto their eyes. They are grabbed and held in place while people shove even more chemicals down their throats. As a result, these animals often suffer from bleeding, blindness, severe abrasions, infections, toxicity, organ damage, cancer, general pain, and death.

All this for some human "beauty"? No thanks. Torture isn't beautiful.

Demand that British lawmakers stand strong and refuse to undo their ban on animal testing for cosmetics! The ban must remain!
Sign Petition
SHAREShare this petition with friends!TWEETEMAILEMBED
Sign Petition
See more petitions:
You have JavaScript disabled. Without it, our site might not function properly.

Care2
The UK might start forcing companies to test on animals! Speak out for the animals now!
SHARETWEET