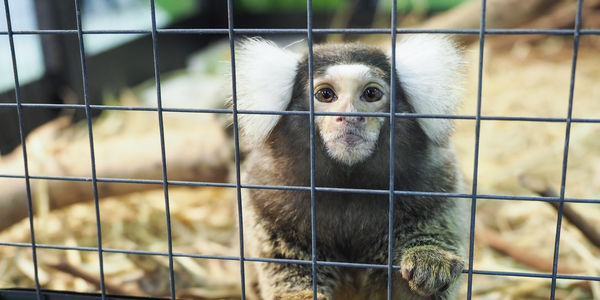 On the heels of a jaw-dropping exposé that the British Ministry of Defence has been conducting brutal experiments on animals for years, comes the news that they weren't the only ones involved.

An article in the Mirror suggests that the U.K. has been conducting more grotesque experiments, this time, at the urging of and with money from the United States government. That means both countries, who ostensibly have strong animal welfare laws, have been torturing, maiming, sickening and killing animals for years, while their citizens are none the wiser and foot the bill.

The latest revelations say that the Pentagon has been giving the U.K. millions of dollars in blood money to perform tests on monkeys' pigs, rabbits and other animals in Wiltshire, a county in South West England.  Since 2012, the U.S. has given the U.K. more than, $60 million to use biological and chemical elements on animals. Some experiments included infecting primates with Ebola and anthrax. Others included exposing animals to mustard gas and phosgene — a weapon responsible for around 85,000 deaths during the First World War.

What is possibly most upsetting about the news is that many of these experiments would be illegal to perform in the United States. Using nerve agents on animals, for example, is banned in the U.S. But the U.K., to date, has no such prohibition. Essentially, the U.S. is exporting their dirty work overseas and the U.K. is the perfect accomplice since animals aren't legally protected against such heinous practices. That needs to change.

Please sign the petition and demand that the United Kingdom ban these types of experiments now. If they are illegal in the U.S. they should be equally as objectionable in the U.K. Let's make it happen! Sign today.