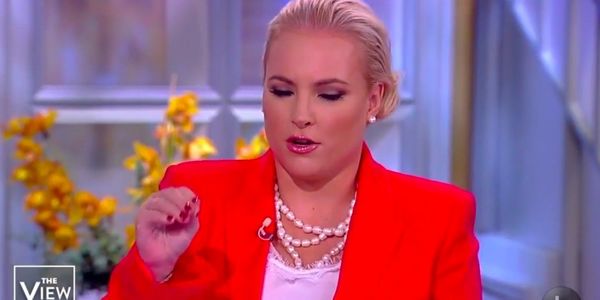 While the rest of the country watched in horror as the nation's top Democrats revealed that they were had been targeted by bombs sent via mail, one conservative talk show host opted instead to make excuses and issue a sickening false equivalency.

During a discussion about the need for leadership in the Republican Party — someone to strongly condemn the violence — Meghan McCain, co-host of The View, equated the assassination attempts to Republican House Majority Leader Mitch McConnell not being able to enjoy his meal in peace last week after disgruntled constituents were caught on camera berating him in a restaurant.

"When [Trump] says things like, 'The press is the enemy of the people,' his entire party needs to stand up against him and say something. Mitch McConnell — where is he? He's the leader of this party," Joy Behar demanded, to which McCain replied, "He's getting harassed and heckled when he goes out in public to have dinner."

"But nobody's placing bombs..." Behar starts to respond before being drowned out by the other co-hosts.

But her point was heard loud and clear. McCain was asserting that both side are guilty of violent rage because McConnell's dinner was interrupted.

This kind of false equivalency is not only glaringly tone-deaf, it justifies this enormously dangerous behavior on the right. In her desperation to defend the indefensible, Meghan McCain has severely misrepresented herself, her program, and her family.

There is absolutely no place in this country for such disgusting rhetoric — rhetoric that her father would surely not approve of.

We, the undersigned, demand that she issue a public apology before her words lead to more harm. There must be consequences for this type of dangerous conduct; acknowledging her mistake is the absolute least she could do.