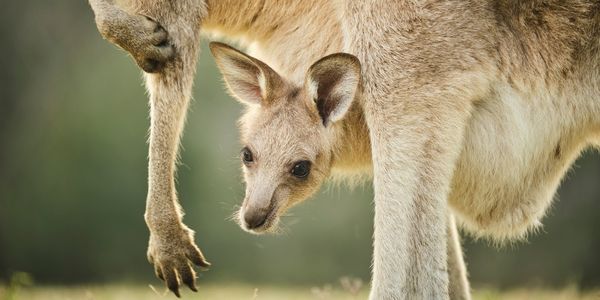 Baby Kangaroos Are Beaten And Skinned to Make These Shoes!

Boasting some of the richest biodiversity in the world, Australia is estimated to be home to as many as 300,000 different species of animals. In such company, it takes a truly iconic animal to fill the role of Australia's national animal -- and the kangaroo certainly lives up to the task. Immediately recognizable are their long, powerful legs, allowing them to travel over six feet per leap, and the pouch they sport on their belly for carrying their young. But even their emblem status does not keep them safe from the whims of humans. Kangaroo skin, strong but light, has long been sought after for things like football (or soccer in the U.S.) cleats, baseball mitts, and many types of gloves. California, a U.S. state known for leading the way in animal welfare policy, was ahead of its time when it banned the sale of products made from kangaroo skin all the way back in 1971. But in 2020, an investigation discovered that some huge brands thought they were above the law. Nike and Puma have both been selling kangaroo leather products in California despite the ban!

Sign the petition today if you want Nike and Puma to do the right thing and abide by California law! Tell them to stop selling kangaroo leather products in the state, and commit to phasing out the use of kangaroo leather company-wide!

These kangaroos are ripped from the wild, stolen from their families and lush homes. The Australian government dictates that kangaroo hunting must be done with a firearm, which is cruel enough -- but when it comes to the most vulnerable, like babies or adult kangaroos that are already wounded, the cruelty is amplified. These poor animals have their heads severed from their bodies, or they are painfully bludgeoned to death. The officially stated reason for this heinous method is to "destroy the brain," and apparently any semblance of humanity. California's law is an indirect attempt to curb this brutality. Companies like Nike and Puma disregarding said law puts pain and profit above compassion and animal welfare.

Ideally, kangaroo leather would be totally banned worldwide. With advanced technology and a wide variety of synthetic materials at our disposal, using the skin from innocent animals for our luxury sport equipment is simply outdated and cruel. But passing laws that keep these products off the shelves is the right step towards making them obsolete, and Californai did that! But statewide laws can be difficult to enforce when these companies sell to states and nations all over the world. That means that it is Nike and Puma's responsibility to do the right thing and abide by the law! They have the time, money, and resources to do so -- any noncompliance is a result of negligence, apathy, and a gross misuse of power.

If we speak out enough, we can really get Nike and Puma where it matters most -- in their profits. Let's make sure that they know we are watching, and until they decide to put animal welfare first, we won't rest! Sign the petition and demand that Nike and Puma comply with California law, halting the sale of products made with kangaroo skin in the state, and then take it one step further by phasing out all kangaroo leather products!

Care2
Baby Kangaroos Are Beaten And Skinned to Make These Shoes!
SHARETWEET