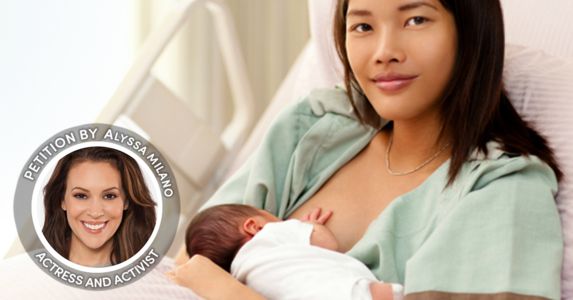 Breastfeeding my children has been one of the greatest joys in my life. I am so proud that my body was able to provide them with the sustenance and comfort they needed to grow and develop during their first months of life.

Decades worth of studies have shown that the benefits of breastfeeding are tremendous. Breastfeeding helps protect babies from illness, and helps moms heal following childbirth. It leads to a lower risk of type 2 diabetes and certain types of breast and ovarian cancer. Breastfeeding also reduces the rate of infant and child mortality in places with food shortages and lack of clean water.

Formula should always be easily available for women who cannot breastfeed or choose not to, but my goal and the goal of public health advocates around the world is to make it easier for new moms to feed their children with their bodies. This means normalizing breastfeeding, educating women about its benefits, and providing them with much-needed support. Unfortunately, it also means going up against the $70 billion baby formula industry dominated by Nestlé and Abbott Laboratories.

For decades, Nestlé, Abbott Laboratories, and a handful of other western baby formula companies have worked to undermine women's confidence in breastfeeding, especially low-income women living in developing countries. They've sent representatives into hospitals to push formula onto new mothers who don't need it. Nestlé used their sizable, global marketing reach to convince women that breastmilk alone won't give their babies enough nutrition, and used packaging that implies that their product is just like breastmilk.

Many of the women who are targeted in developing countries can't afford the recommended amount of baby formula, so they water it down to make it last longer. This has resulted in widespread malnutrition. And in places where women don't have access to clean water to mix with formula powders, babies and children are dying from waterborne illnesses. A recent study found that universal breastfeeding could prevent about 800,000 child deaths every year.

That is why I was so infuriated when I learned about the Trump Administration's recent attempt at the World Health Assembly to weaken a resolution aimed to "protect, promote, and support breastfeeding." The current US President's relentless, unprecedented, and inexcusable attacks on the health and safety of children show where his priorities lay. So I am calling on two of the largest baby formula companies in the world to commit to protecting children in a way that my President unfortunately refuses to do.

Help me celebrate World Breastfeeding Week by signing this petition demanding that Nestlé and Abbott Laboratories put the health and well-being of moms and babies above corporate profits.