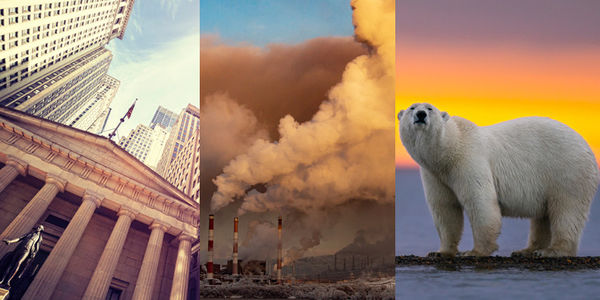 Banks Are Funding Our Climate Destruction. They Must Divest Now!

Every few months, new scientific reports remind us again and again that we, as humans living on this planet, are about to push the Earth past the climate tipping point -- from which there is no return. The greenhouse gas emissions caused by fossil fuels -- used in all sorts of applications, from powering vehicles to energizing homes and more -- are one of the largest contributors to this impending climate calamity. Yet the most powerful players in the world are refusing to take a step back from this dirty industry.

Including big banks. In 2021, the Banking on Climate Chaos report investigated the deeply entangled links between the worlds of finance and dirty energy. It found that JPMorgan Chase, Citi, Wells Fargo, and Bank of America are the four worst banking institutions when it comes to funding the climate crisis, through their massive investments in fossil fuels.

The fate of the whole world rides on whether or not we can cut ourselves off from oil, gas, and coal. But Big Banks apparently don't care about the fate of the world -- about you, your family, your community, or future generations. They're willing to throw all that to the wind and snub our collective species.

Sign the petition to demand all corporate banking institutions fully divest from all fossil fuels, including oil and gas supplies! They must cease funding our destruction!

Luckily, not all banks are determined to wreck our planet's future. Some have explicitly decided not to invest in fossil fuels -- including BNP Paribas bank and many community banks as well as credit unions.

Now, even Bank of America is starting to feel the "heat" (or warming). Seven years ago, the financial giant declared that it would cease funding coal projects, completely divesting. While the other Big Four followed suit afterwards, they remain firmly invested in other dirty energy sources. On top of that, the people are starting to fight back, unwilling to let these soulless corporations determine our future.

Last year, shareholders in ExxonMobil and Chevron "revolted." Shareholders directed ExxonMobil to change up its board members in order to finally begin taking climate change seriously. Chevron's shareholders approved a proposal demanding the fossil fuel company slash its amount of greenhouse gas emissions (including the emissions created by its customers). In the Netherlands, a court ruled that Shell must reduce its emissions to nearly half of its current amount.

The writing is on the wall: climate change is already here, the worst is coming, and Big Banks are going to be held accountable for their contributions to this horrible disaster.

All banks, including Bank of America, JPMorgan Chase, Citi, and Wells Fargo, must immediately and completely STOP funding climate change. They must divest their copious funds from fossil fuel companies now! Sign the petition to stand with our planet!
Sign Petition
SHAREShare this petition with friends!TWEETEMAILEMBED
Sign Petition
See more petitions:
You have JavaScript disabled. Without it, our site might not function properly.

Care2
Banks Are Funding Our Climate Destruction. They Must Divest Now!
SHARETWEET