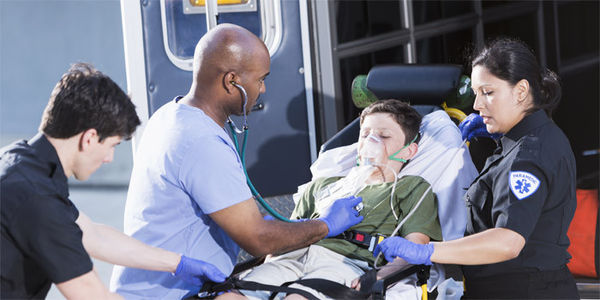 Several years ago, I had a freak health incident. My partner and I went out biking in the summer, planning to have a nice joy-ride through the city. Suddenly, half a mile in, I realized I couldn't breathe. I started to panic. As we pulled over, I collapsed on the sidewalk, gasping for air.

My partner did what anyone ought to do in that situation — he called an ambulance. But when it arrived, I realized: I cannot get in that ambulance, because I have no idea how much money it will cost me. The EMTs checked me out and determined that I probably just hadn't drunk enough water, but wanted to drive me to the hospital just to make sure. I refused. Without knowing for sure what was covered under my health insurance plan, and how much, it was simply a trip that I could not financially afford.

And there's a reason I was scared: ambulance operators in the U.S. issue "surprise" bills to patients and their families all the time, with no warning if the ambulance trip is covered by their insurer, that a bill is even coming, or how much it will cost. It seems second nature to dial 9-1-1 during an emergency, but no one warns you that afterwards, you could get hit with a $800 bill just for a single ride in a rescue vehicle.

As one health economist, Christopher Garmon, says: "Ambulances seem to be the worst example of surprise billing, given how often it occurs. If you call 911 for an ambulance, it's basically a coin flip whether or not that ambulance will be in or out of network." In fact, ambulance charges account for the largest source of unexpected medical bills in the U.S. — outweighing emergency room visits, and elective inpatient admissions.

Five U.S. states have begun the process of restricting surprise billing in doctor's offices and hospitals, but they haven't touched on ordinary ambulance rides. So far, Congress also hasn't wanted to address these predatory practices. And, big surprise, there's a reason why: the ambulance industry has its own lobby, and it's been arranging meetings with members of Congress to pressure them to lay off. They say that regulating ambulance costs is too complex and treads on local policy.

We say: that's a load of horse manure. We're talking about people's lives here. This is the same old story when it comes to health care policy in the U.S. It's the monied interest groups versus the people who actually need health care in order to survive. We don't call it "rich people health care." We call it health care.

Enough is enough. People need ambulances, and they exist for a reason — to help us in times of crisis. We won't let corporate lobbyists continue to deprive us of the necessary resources we need to take care of ourselves and stay alive!

Sign the petition to demand that politicians in the U.S. finally tackle this egregious system and restrict "surprise" billing from ambulance providers!
Sign Petition
SHAREShare this petition with friends!TWEETEMAILEMBED
Sign Petition
See more petitions:
You have JavaScript disabled. Without it, our site might not function properly.