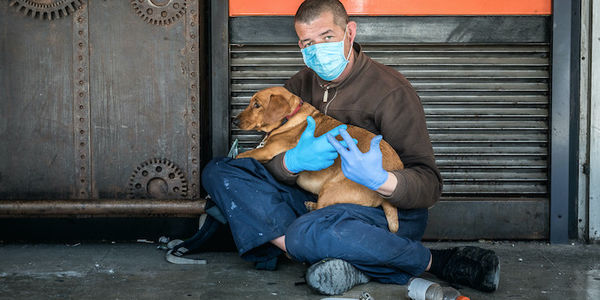 It's illegal to exist as a homeless person in this city. But the law provides nowhere for them to go.

The city of Los Angeles has now essentially made it a criminal offense to be a person without a house in... pretty much every part of the city.

Here is a list of all the places where it is illegal to exist and be homeless: private property; public sidewalks; within 5 feet of an entrance or exit to any building; within 10 feet of any driveways or loading docks; and within 500 feet of schools, day cares, parks, libraries, overpasses, underpasses, freeway ramps, tunnels, bridges, subways, or bike paths.

This is essentially a description of every place in an entire city. And so now, if you're unfortunate enough to be unhoused, you are now — simply put — a criminal, as long as you exist in almost any place within one of the largest U.S. cities.

Sign the petition to demand the California state government overturn this cruel and inhumane law now!

This law represents the city making a choice about its priorities. While it dedicated upwards of $2 billion to the notorious LA Police Department budget in 2021, less than half of that amount is reserved for solving homelessness or funding housing and other essential services.

Let's be clear: making it illegal to be unhoused does nothing in terms of solving homelessness. It doesn't eradicate the causes of poverty or homelessness. It doesn't provide job training or educational or healthcare opportunities. It does nothing except target some of the most marginalized people in our society, who endure daily suffering, and intentionally makes their lives even worse.

A law cannot simply write the facts of reality out of existence. Just because someone signs an order saying you aren't allowed to exist, doesn't mean you somehow suddenly don't exist. It does mean, however, that it is now even more legal than ever before to harass and discriminate against you.

These 66,000 people aren't suddenly going to disappear into thin air — and if that's the goal, it is extremely chilling. Where are all of these people going to go? Shelters operating inside the city only have enough capacity for, at a maximum, 39% of LA's current homeless population. That means almost two-thirds have nowhere to go. But they just better not be outside.

Tell California's governor Gavin Newsom and the California state legislature to pass a statewide law overturning such horrendous cruelty!
Sign Petition
SHAREShare this petition with friends!TWEETEMAILEMBED
Sign Petition
See more petitions:
You have JavaScript disabled. Without it, our site might not function properly.

Care2
It's illegal to exist as a homeless person in this city. But the law provides nowhere for them to go.
SHARETWEET