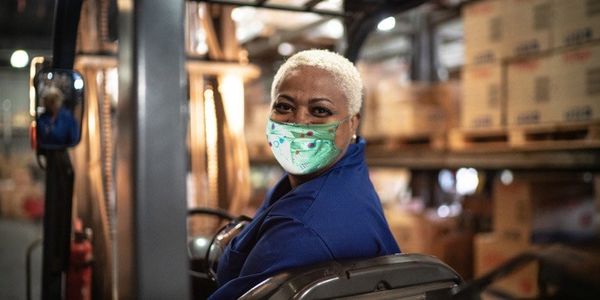 On April 1, 2022, for the first time ever, workers successfully unionized at an Amazon corporate warehouse. This was a huge win for workers everywhere, not just for the approximately 8,300 individuals employed at the corporation's Staten Island warehouse in New York. That's because Amazon has quickly become one of the largest employers in the U.S. and in the world -- and has been making a big name for itself as a place that mistreats its workers.

Amazon workers all over the country and the world have been writing to the Staten Island union's new president, Chris Smalls, celebrating, overjoyed and inspired. It's excitingly similar to what's happening at Starbucks locations. A movement is beginning, with staff upwards of 50 different Amazon buildings wanting to start their own unions as well.

But, predictably, Amazon wants the U.S. government to throw out its workers' pro-union votes -- wanting to rewrite history because it didn't like the result. But that's not the way this is going to work. Instead, it's time for MORE Amazon warehouses to join the wave and unionize for their rights!

Sign the petition to demand Amazon stop getting in the way of unionization. If it's not going to treat its workers better, it needs to step aside so workers can successfully advocate for their collective rights!

Amazon, as a corporation, has been guilty of many anti-labor infractions over the years. For starters, the company raked in approximately $470 billion in net sales just last year alone, and has elevated its CEO Jeff Bezos to become the second-richest human in the entire world. Meanwhile, its workers are barely earning enough to pay rent. On top of that, management treats its human staff like robots. Supervisors intensely micromanage workers' bathroom breaks and productivity, punishing them when they can't work fast enough or have to pee one too many times. During the summer, when temperatures soar in New York -- particularly inside baking warehouse facilities -- there is insufficient air conditioning. And during COVID, the corporation was allegedly slow to implement necessary pandemic safety protocols.

All workers want is the obvious, basic rights we should all have. Better pay. Better sick leave policies. And a more human way of managing people, without penalizing their bladders.

Yet Amazon responded to these incredibly reasonable demands by spending upwards of $4 million on aggressive anti-union efforts. It hired anti-union labor consultants and forced employees to sit through anti-union propaganda meetings. It also created a racist smear campaign against Chris Smalls, a former employee who became one of the main leaders of the successful Staten Island unionizing effort.

Luckily, workers are showing that they can fight back and win -- even against the biggest, profitable, seemingly most untouchable corporations in the entire world. The National Labor Relations Board may even be considering a new helpful move, too. It's possible the Board may ban corporations' mandatory anti-union gatherings, called "captive audience" meetings.

History is finally moving in the right direction -- in the people's direction -- thanks to the dedicated efforts of genuine heroes like Chris Smalls. Amazon needs to show it's not an evil, anti-labor corporation by agreeing to both treat its workers better -- and by ceasing its endless onslaught of anti-union campaigns. Sign the petition now!
Sign Petition
SHAREShare With FriendsTWEETEMAILEMBED
Sign Petition
See more petitions:
You have JavaScript disabled. Without it, our site might not function properly.