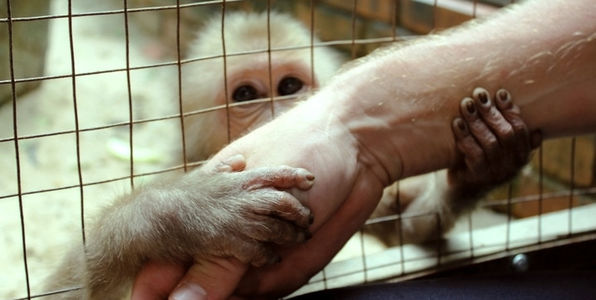 At This Animal Experimentation Lab, Monkeys and Pigs Are Tormented Until They Die

Whistoleblowers have discovered horrible abuses at an animal testing laboratory in Washington state, where monkeys and pigs have been subjected to heinous conditions.

Bone fractures, chemical overdoses, death, euthanasia - all these and more have befallen the poor imprisoned animals at the Altasciences Co. animal research facility. It's time to shut this horrific cruelty down now.

Sign the petition to demand the U.S. Department of Agriculture (USDA) step in and end the mistreatment of animals at Altasciences labs!

Almost a dozen animals experienced broken bones due to rough treatment and faulty equipment at the site. In one case, a staff member was attempting to force a monkey to endure yet another experiment -- but the captive monkey resisted, frightened and desperate. So the staff member restrained the monkey harder, until they broke the poor creature's arm.

In another instance, investigators discovered that eight of the lab pigs' cages were "structurally unsafe" - leading multiple animals to sustain bone fractures and breaks. Staff didn't even notice, diagnose, or treat one pig's fracture for 15 days, leaving the animal in pain for more than two weeks.

The labs are massive, covering 29 acres just north of Seattle, yet somehow in all that space, Altasciences leaders haven't managed to include enough veterinarians to properly care for and treat the animals they experiment on. So in addition to enacting cruelty against animals, it is also guilty of medical neglect. The USDA has already discovered four "critical violations" at the corporation's facilities. What else has Altasciences been up to that it doesn't want us to know about?

Pigs and monkeys are smart, social, curious creatures. They don't belong locked in cages, being tormented without their understanding or consent. They certainly don't deserve excruciating broken or fractured bones and death. As the organization Stop Animal Exploitation Now! has noted, these injuries and deaths are "totally unnecessary" and absolutely preventable.

Tell the USDA to protect animal welfare and shut down this negligent facility!
Sign Petition
SHAREShare With FriendsTWEETEMAILEMBED
Sign Petition
See more petitions:
You have JavaScript disabled. Without it, our site might not function properly.

Care2
At This Animal Experimentation Lab, Monkeys and Pigs Are Tormented Until They Die
SHARETWEET