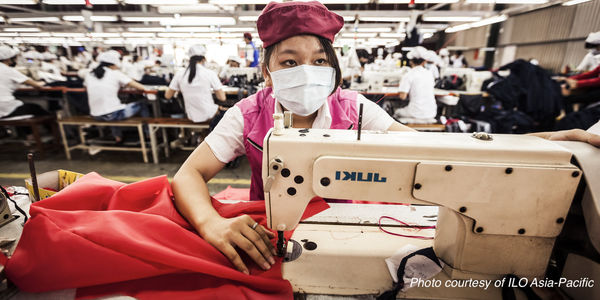 The fast fashion company Shein is a billion-dollar corporation. It's famous for its low prices and wide variety of clothing options, making it very popular around the world. Shein is also infamous for its horrible environmental practices, polluting the world with toxic chemicals as well as far more production than is actually necessary.

But it's not just hurting the environment. It's also hurting its workers - to the point of violating China's federal labor laws.

Sign the petition to demand fair living wages and a healthy working environment for these workers!

An undercover investigation led by the U.K. team with Channel 4 revealed shocking and inhuman labor conditions. In multiple factories in China, the company forced workers to toil for as much as 18 hours in a single day - with only 1 single day off out of a whole entire month.

Laborers have to work so much, they often literally don't have time to bathe. At one facility, an undercover reporter noticed that women had to use their lunch breaks just to wash their hair.

On top of that, they're paid almost nothing. In one factory, workers' wages amounted to around $0.04 per garment they produced. But if they accidentally made even one mistake, managers would revoke two-thirds of their wages for the day.

Shein's executives clearly only care about corporate profits, and they're willing to exploit workers and the environment to get what they want. In 2021 alone, the corporation posted $15.7 billion in revenue - and those figures have been increasing exponentially year over year.

Shein's founder is now a billionaire, but is he sharing that ridiculous amount of money with the people who ACTUALLY make his company profitable? No! Everything he has was built on the backs of these laborers.

People are not expendable. Workers are human beings and must be treated with dignity and respect!

Sign the petition to demand that Chris Xu, the billionaire founder and CEO of Shein, finally do the right thing. He must fully abide by Chinese labor laws and go above and beyond, by providing all of his workers with an actual living wage, as well as provide safe and healthy working conditions!
Sign Petition
SHAREShare With FriendsTWEETEMAILEMBED
Sign Petition
See more petitions:
You have JavaScript disabled. Without it, our site might not function properly.