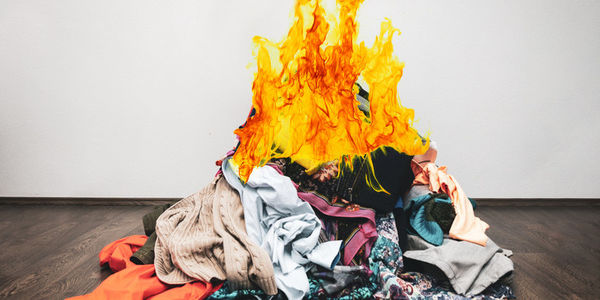 Picture a mountain of clothes — all of them new, unworn, and ready to go home to someone and be loved. And then picture it on fire, set alight by major fashion retailers to avoid someone seeing their brand as "cheap" or "basic" because it's worn by a low income person.

This is what has been happening all the time, for years, on the orders of major chains like Louis Vuitton, Nike, Urban Outfitters, and H&M. Rather than discounting their excess merchandise or — better yet — donating it to charities or homeless shelters, these brands are obsessed with making sure they're seen as expensive, elite, and in-demand — and cutting deals would apparently destroy this image.

The real losers in this mayhem are twofold: people in need, and also the Earth.

Sign the petition to demand that the United States ban these wasteful fashion bonfires, now!

The build-up of unsold fashion has never been more intense than it is right now. During the pandemic, brick-and-mortar stores were mandated to close for months in order to protect the public from the highly contagious and rapidly spreading coronavirus. Even now, in September 2020, in-person shopping is still extremely difficult and scary, and continues to be prohibited in some places.

As a result, sales are down and fashion houses are facing unprecedented amounts of unsold clothing. Since the industry already overproduces even in a healthy year, the amount of warehoused inventory right now is staggering.

Facing this reality, brands — in theory — have a lot of options. They could reuse the items in future years. They could work with non-profits to hand these garments out to those people who don't have enough clothing, using this as a positive, moral opportunity. They could choose to hold a once-in-a-lifetime "special corona sale," even though brands like Louis Vuitton remain expensive through their commitment to not go on sale. There are a million options here.

But the main option, and the one that these fashion houses take every year, is burning.

Making giant bonfires out of completely new, faultless clothing, is incredibly cruel to those who have nothing and downright dangerous for our environment. Much of the clothing on the market these days is made with synthetic materials like polyester and viscose, meaning they're laden with fossil fuels, plastics, and chemicals. Burning them launches large amounts of toxins and microplastics into the air, ground, and water, and that feeds back into our ecosystem, inevitably ending up in the food that we eat, the water we drink, and then lodged in our very own bodies. This type of pollution also releases greenhouse gases like carbon dioxide, meaning that it's actually accelerating climate change. Clothing incineration actually causes more pollution than burning either coal or natural gas.

Luckily, France is pushing back. The fashion capital of the world recently decided to ban all fashion bonfires, starting in 2023. This is an excellent start, but we can't stop there. It's time for more countries to follow suit. And since the United States is one of the largest consumerist, capitalist countries in the world, it's time for U.S. lawmakers to take a stand.

Tell fashion houses and lawmakers to get their priorities right. Sign the petition to demand that the U.S. pass a law banning all clothing designers, manufacturers, and stores from burning excess, unsold merchandise!
Sign Petition
SHAREShare this petition with friends!TWEETEMAILEMBED
Sign Petition
See more petitions:
You have JavaScript disabled. Without it, our site might not function properly.