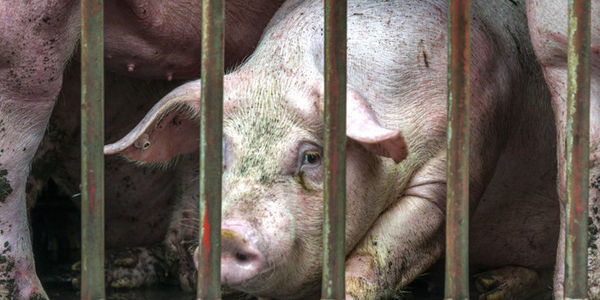 These factory farms promised to treat animals compassionately. They lied.

The Retail Council of Canada (RCC) is an organization dedicated to representing the interests of retail businesses all across the country, ranging from companies in the fields of groceries to pharmaceuticals to general merchandise.

Back in 2016, the RCC made huge headlines by announcing its member businesses were agreeing to prioritize animal welfare. Specifically, they promised to actually phase out gestation cages. These cells are just inches larger than the pig they contain. Pregnant mamas are locked in and confined until they give birth. The RCC also promised to phase out the use of extremely tight, tiny battery cages for egg-laying chickens. These changes were set to be implemented by 2022 and 2025 respectively, meaning the end to these cruelties was within sight!

That is, until the RCC abruptly changed course in March 2021. Now, the retail association is reneging on all "previous commitments" regarding "sow housing and cage-free eggs." Instead, the RCC is saying its members can simply abide by voluntary, non-mandatory guidelines developed by the National Farm Animal Care Council in Canada.

This is pure trickery. Sign the petition to demand the Retail Council of Canada show some integrity and remain true to their animal welfare promises!

This isn't the first time agricultural industry leaders have used such bait-and-switch tactics to appease the public while getting away with torture. Two years before the RCC's huge declaration, in 2014, members of the Canadian pork industry agreed that by 2024, factory farms would stop using gestation crates. Earlier this year, this group also decided to distance themselves from their own commitments, stating they needed a five year extension to meet their own promises. But it doesn't take a genius to realize that by 2029, this group will again say, "Oops! We need more time."

Gestation crates and battery cages are both extremely barren, metal enclosures that are meant to ensure two things. First, to pack as many animals into as small a space as possible, like meaningless objects devoid of life, so farm executives can squeeze out as much profit as possible. And second, to prevent the animals from turning around, moving, or doing anything that might supposedly "injure" them.

But there's plenty of evidence to suggest that such terrifyingly confined spaces are themselves injurious. Experts say that smart, social pigs and friendly, sophisticated chickens experience tremendous stress from being turned into machines and stuffed into tiny production cells.

For example, battery cages, on average, are smaller than a single piece of printer paper, and hens are locked into these crushingly small containers for their entire lives. And yet, to stay alive, these animals must keep laying eggs so their captors can make huge profits feeding the masses. For mama pigs, their agony locked in cages doesn't end when they give birth — at that point, they're simply moved to new tiny cages, and promptly separated from their newborn babies.

Any further minute spent hemming and hawing about the RCC's promises to improve animal welfare is another minute that these living, breathing creatures — with wants, pain, and feelings — are suffering. We just can't wait.

Make sure the Retail Council of Canada hears your voice! Demand that they stick up for what's right by phasing out the use of chicken battery cages and pig gestation crates for all member businesses by 2022!
Sign Petition
SHAREShare this petition with friends!TWEETEMAILEMBED
Sign Petition
See more petitions:
You have JavaScript disabled. Without it, our site might not function properly.