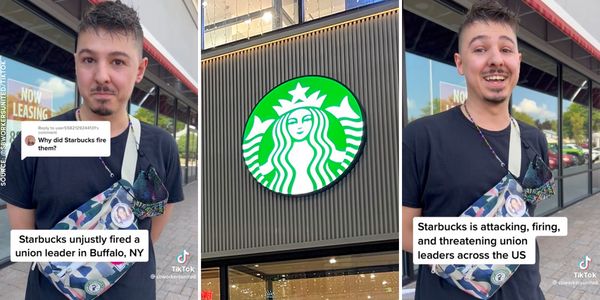 In 2021, Starbucks' net revenue reached a whopping $24.61 billion. The company's CEO, Howard Schulz, has a net worth of $4.1 billion -- meaning he could never work another day in his life and still have more money than the vast majority of Americans make in their entire lifetime. But apparently that's not enough money for Schulz, because Starbucks is engaging in rampant union-busting in fear that it will actually have to compensate its workers fairly.

Sign now to demand Starbucks stop union-busting and give jobs back to the union organizers that the company has fired!

Less than a year ago, Starbucks workers in Buffalo, New York formed the first Starbucks union. In the months since, over 200+ stores have voted in favor of unionization, part of a broader, exciting resurgence in the labor movement following the onset of the COVID-19 pandemic. Workers are standing up for their rights and collectively bargaining for better wages, better benefits, and more respect in the workplace. But Starbucks is engaging in relentless union-busting -- from firing union leaders to closing entire stores that are organizing in favor of a union. One worker, Sam Amato, was fired after working for the company for 13 years.

Research has repeatedly shown that unions benefit all workers – even non-union employees at different jobs altogether. In fact, strong unions actually set a pay standard that nonunion employers follow. Unions also have been shown to shrink the racial and gender pay gaps, and union workers on average make over 10% more money than their non-union counterparts. So when Starbucks engages in union-busting, what the company is actually doing is actively resisting fair compensation and increased equity in its workforce.

Service work is extremely difficult, and Starbucks workers deserve to be fairly compensated for their labor. This Labor Day, let's support workers who make so many Americans' lives better by preparing them delicious coffee. Sign the petition now to tell Starbucks: stop union-busting and make amends with all of the workers you've fired in your union-busting frenzy!
Sign Petition
SHAREShare With FriendsTWEETEMAILEMBED
Sign Petition
See more petitions:
You have JavaScript disabled. Without it, our site might not function properly.