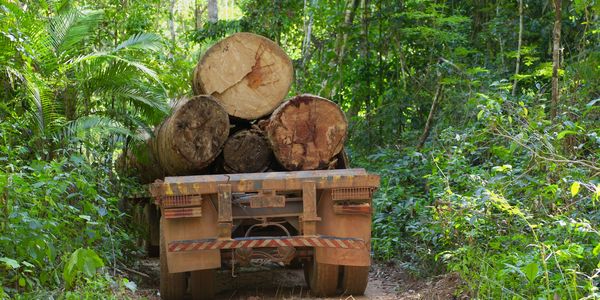 To most people, the Solomon Islands may seem like small specks of land in the huge expanse of the South Pacific. But to its more than 600,000 residents, it's home. And they will do anything to protect it. The nation's forests face the very real threat of disappearing in the coming years due to overexploitation spawned by the voracious demand for timber in Asia.

Since 1990, for example, Solomon Islanders have seen more than 20% of their forest disappear, putting both their livelihoods and their native species' existence at risk. Now some residents are fighting back, but if the government has their way, they will spend years in jail for their resistance.

There are many logging concerns now toppling old-growth forests throughout the archipelago, but according to activists, one company's operations — Malaysia-based Xiang Lin SI Ltd — showed up on their southern island of Nende and started their operations illegally. But even though it is Xiang Lin Si Ltd that is accused of breaking the law, the government has decided to prosecute the brave activists that are trying to stop them.

According to villagers, Xiang Lin didn't go through the proper steps and channels in order to acquire a license. They didn't consult the locals, they didn't give them the obligatory 30 day period to raise any grievances and — perhaps most troubling of all — there are signs that the previous provincial premier, Baddley Tau had accepted bribes that might have allowed logging companies like Xiang Lin to start operations without going through the correct channels.

With all the uncertainty into the illegality of the Xiang Lin's practices, it's no wonder that so many Nende Islanders have started fighting back. Some of them, now known as the "Nende Five" have been arrested and face serious jail time if they are found guilty.

Xiang Lin has encroached on the livelihood of an entire island of people, their culture, their ecosystem and their way of life. They have bulldozed and destroyed. And now, after all that, they are about to be the cause of unfair incarceration of people who were just want to protect their lands.

Sign the petition and ask the Solomon Islands to drop the charges against the Nende Five and tell Xiang Lin to cease operations on Nende immediately.
Sign Petition
SHAREShare this petition with friends!TWEETEMAILEMBED
Sign Petition
See more petitions:
You have JavaScript disabled. Without it, our site might not function properly.