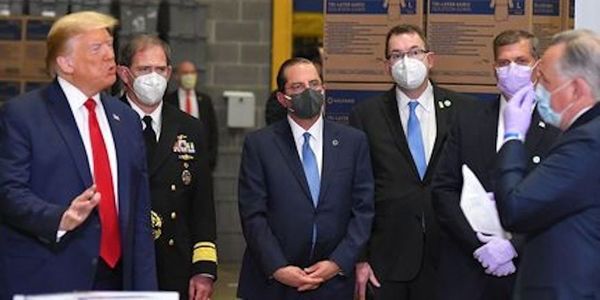 The President of the United States has some of the best medical experts on Earth working for him. Each of them has said unequivocally that during this pandemic, wearing a mask is vital to protecting the health of those around you.

Of course, Donald Trump has never been interested in the welfare of anyone but himself. So it's no surprise that at the White House, Trump requires most staff to wear masks around him but refuses to return the favor.

That would be bad enough, but it gets worse. Trump has repeatedly toured plants wear essential workers toil long hours. They wear masks for his safety and he endangers them all, while also setting a horrendously dangerous example for the public looking on.

Manufacturers have a responsibility to put a stop to this. Trump says he is tested all the time, but with a five-day incubation period, coronavirus could be present and contagious even in the immediate aftermath of a short-term test. On top of that, White House tests have shown to miss nearly half of all positive cases.

We used to expect the president to be a role model, but that went out the window on January 20, 2017. All we're asking now is for this Oval Office occupier to show the basic responsibility to not endanger the lives of his own people for a photo op. If he can't do that, he needs to be denied the photo op.

Add your name to tell manufacturers to stop endangering workers by letting Trump tour plants without a mask!