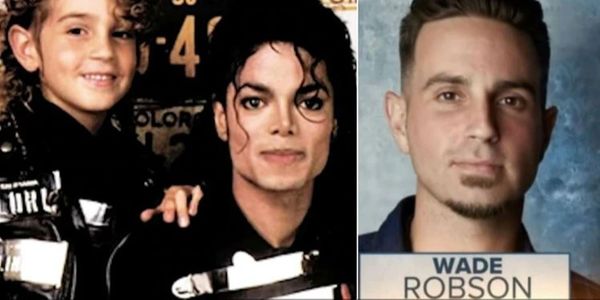 If you walk into the Mandalay Bay Casino lobby in Las Vegas, you will likely be met with an imposing sight — a 10-foot tall Michael Jackson statue staring down at you from above. The statue was created in 1994 by Diana Walczak and ten reproductions were then sent all around the world to gin up publicity for Jackson's upcoming "HIStory" tour.

Today, it's MJ's history that's in the spotlight. HBO's jaw-dropping documentary "Leaving Neverland" recounts the experience of two men — Wade Robson and James Safechuck — who allege they were victims of serious sexual abuse at the hands of the "King of Pop" when they were children. The piece is so shocking and explicit that producers had counselors on hand for viewers after the showing.

Michael Jackson has long been suspected of child molestation and other abuses towards young men. In 1993, he was investigated by police for having molested a 13-year-old boy, and in 2005 more child molestation allegations led to a trial which ended in his acquittal.

Regardless, clouds have, for decades, hung over Michael Jackson's legacy. But light is finally breaking through, and with the credible allegations brought by Mr. Robson and Safechuck it is time for fans to reckon with the fact that Michael Jackson may not have been the person we thought he was.

While fans come to the shocking realization of what Michael might have truly been, businesses like the Mandalay Bay who make millions off his image should also do the same. The "HIStory" statue, for example, now greets guests on their way to the casino's in house performance of the Cirque du Soleil production of "Michael Jackson One." The show grossed a whopping $100 million in its first year and attracts thousands of spectators a year.

With the newly released allegations against the pop star, one must ask why Mandalay Bay and Cirque du Soleil continue to pay homage and earn money off Jackson's image. What message are they sending to sexual abuse survivors when they walk into the casino's lobby and are met with the chilling stare of a sexual abuser?

While his statue still stands in the Las Vegas casino, other organizations are taking action. The National Football Museum in Manchester, United Kingdom has already taken down their MJ statue.

It's time Mandalay Bay and Cirque du Soleil follow in the museum's footsteps by cutting ties with the Jackson estate once and for all. Sign the petition and tell Mandalay Bay to remove its Michael Jackson statue and cancel the Michael Jackson One" show.
Sign Petition
SHAREShare With FriendsTWEETEMAILEMBED
Sign Petition
See more petitions:
You have JavaScript disabled. Without it, our site might not function properly.