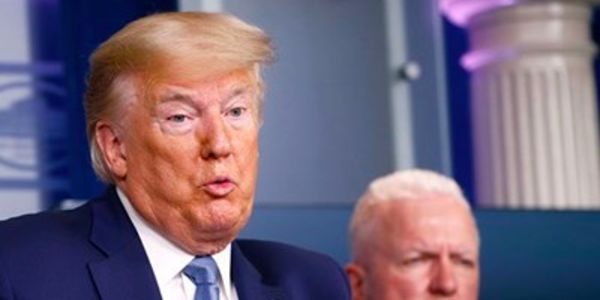 The daily Coronavirus Task Force briefings are important and provide critical information. But portions of them are also a clown show. President Trump is using his time at the podium to peddle unproven and dangerous cures, and mislead the American public about the scope, scale and danger of the pandemic. He is treating them much more like a campaign rally riddled with lies and distortion.

Sign on if you want American broadcasters to only televise information from actual trained public health officials!

According to the Washington Post, "The high-stakes theater playing out between Trump and one of his top public health officials underscored a tense dynamic in the White House: a squadron of scientists and health experts — including Birx and infectious disease expert Anthony S. Fauci — caught in an uneasy tug-of-war with Trump as they push a worldview grounded in data and evidence in a West Wing where the president has mused about a 'miracle' cure."

The media should only cover the portions of the briefings that are presented by trained public health professionals. This is critical for the health and safety for all Americans. To ensure that they are not being used to political propaganda purposes, the media should no longer broadcast the briefings live. Instead, they should record the briefings and only run those portions during which trained doctors and scientists are speaking. At a minimum they should edit out Trump's many obvious lies.

"Trump has increasingly minimized and pushed aside many of the top public health and scientific experts in his administration, instead relying on advice from economic advisers and outside voices in the business community who are urging him to prioritize the nation's economy above all else." The Washington Post continues.

What's worse, now Trump is proposing that we arbitrarily end social distancing on Easter, as if he is God raising the messiah. This will only ensure we get the worst of both worlds, an unchecked pandemic, and the economic upheaval we're already experiencing.

The media has a responsibility to protect the American public from selfish propaganda that will only serve the political interests of a deranged clown, and may well contribute to countless deaths and untold suffering.

Sign on to demand broadcasters protect the public by only airing public health officials and other medical professionals during the daily briefing!
Sign Petition
SHAREShare With FriendsTWEETEMAILEMBED
Sign Petition
See more petitions:
You have JavaScript disabled. Without it, our site might not function properly.