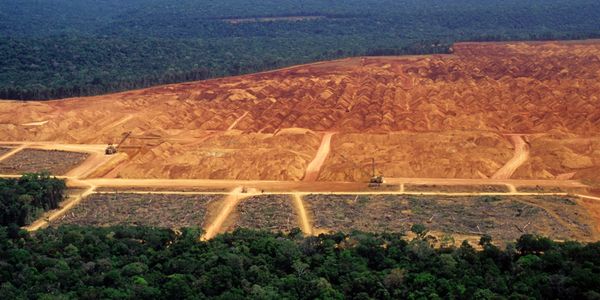 Scientists sometimes refer to rainforests as the "lungs of the Earth." The millions or perhaps billions of trees that populate the world's rainforests consume huge amounts of carbon dioxide and in turn, produce life-giving oxygen. Yet, it is no secret that over the past decades these collections of towering plants have been toppled in staggering numbers.

Nowhere is this more pronounced than in Ghana, where the country has seen its forests disappear by a rate unmatched by any other. According to a study by Global Forest Watch, in just one year (2017-2018), the amount of forests lost in Ghana increased by a jaw-dropping 60%.

Sign the demand Ghana take action to save their rainforests.

In fact, so bad has deforestation become, that the country, once one of the world's largest exporters may now have to import it to feed local supply.

Rainforests globally hold biodiversity that is unrivaled. The Ghanaian rainforests provide habitat and shelter for animals on the brink of extinction including the mountain gorilla and the grey parrot which, despite being commonplace in pet stores, in the wild is disappearing fast.

The main cause of their forest destruction is cocoa farming. Ghana is one of the world's largest producers of cocoa and farmers have toppled entire swaths of the rainforest to make room for more cocoa plantations. These, and deforestation due to large and small scale mining, especially of bauxite leave the jungles of Ghana vulnerable from all sides. And yet, Ghanian government officials are doing nothing to stop the impending destruction of their natural heritage.

According to Quartz, the government has recently signed a deal with China to allow mining in exchange infrastructure and a ban on small scale mining has been inexplicably lifted. Meanwhile, the agency that is supposed to safeguard environmental standards has been crippled by corruption.

This is unacceptable. With the recent news that the world stands on the cusp of losing over 1 million species to extinction, it is now more imperative than ever that countries crack down on the practices that destroy the habitats where these animals live. Practices like mining and uncontrolled cocoa farming.

Please sign the petition today and ask the Ghanian Ministry of Environment, Science, Technology and Innovation and demand that they take action today to stop the irreversible loss of their forests.
Sign Petition
SHAREShare With FriendsTWEETEMAILEMBED
Sign Petition
See more petitions:
You have JavaScript disabled. Without it, our site might not function properly.