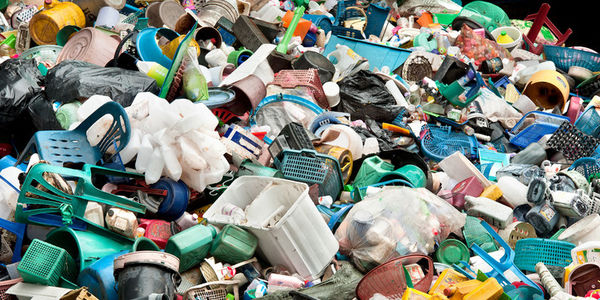 Corporations made us swim in plastic. Now make them pay to clean it up.

Once it's created, plastic never leaves the Earth. It never biodegrades. It never reduces into organic matter or fertile soil. Over time, it breaks down further and further into infinitely smaller pieces — but it always exists. In fact, through this process, it even finds its way into our bodies, getting lodged in our organs, through our tap water, bottled water, and foods — including table salt, seafood, and even beer.

Similarly bad: often, plastic doesn't even get recycled. And when it does go through the energy-intensive process of transforming it from one petroleum-based product into another, that's often on the taxpayers' dime... even though it's corporations that have created all these nasty plastic waste in the first place.

There's something fishy about that, especially considering that due to these corporations' plastic obsession, plastic is quickly becoming the most abundant "fish" in the oceans (set to outnumber real fish within the next 29 years). A new study has shown that just twenty firms are responsible for 55% of the world's plastic production!

Sign the petition to demand that U.S. state governments force plastic-producing corporations to pay for the costs they've inflicted on our environment! They made the mess. Now they should shoulder responsibility for cleaning it up.

When recycling even happens, it is not free — or cheap. Local towns and cities that often already have limited budgets have to scrounge to come up with the resources to deal with all the plastics we pile up. As a result, many areas of the U.S. refuse to even collect some types of plastic, meaning they go straight into the trash.

But we didn't end up here by accident. Huge conglomerates have spent generations shrouding all of their products in plastic, whether it's water or soda, Amazon gadgets or clothing, take out meals, grocery items like vegetables and meat, or really any other thing that can be produced and sold. Corporations have also spent generations telling us that it's our fault. If only we, each individual single consumer, would have recycled things the right way, or cleaned our plastic waste enough before disposal, the Earth would be clean and unpolluted and everything would be fine.

What an epic way to pass the buck.

The U.S. is a huge contributor to global pollution and waste — including plastic waste — and these corporations' insistence on using plastic at every turn is a big reason why. That's why nine states across the U.S. — including California, Colorado, Maryland, New Hampshire, New York, Oregon, Vermont, and Washington state — are trying to pass bills known as "extended producer responsibility" laws. This type of legislation really just means: pushing the responsibility for the plastic waste that corporations create... back onto the corporations.

If they're going to make these wasteful choices, they need to bear that burden. And maybe, in the process, companies will start to rethink how heavily they rely on plastic in the first place.

As we all know, corporations rarely ever change without being forced to by government laws. That's why it's so important for states to pass these extended producer responsibility laws now!

Tell lawmakers in California, Colorado, Maryland, New Hampshire, New York, Oregon, Vermont, and Washington state to pass "extended producer responsibility" laws now to place the burden of responsibility for plastic pollution back onto the companies that created it in the first place!
Sign Petition
SHAREShare With FriendsTWEETEMAILEMBED
Sign Petition
See more petitions:
You have JavaScript disabled. Without it, our site might not function properly.

Care2
Corporations made us swim in plastic. Now make them pay to clean it up.
SHARETWEET