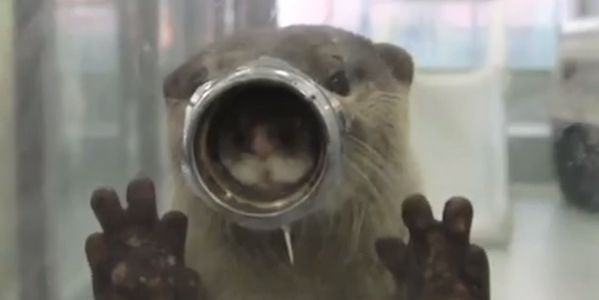 These Cafes Serve Coffee with a Side of Cruelty

Last year, we learned about a cafe in South Korea, where patrons could have their favorite hot beverage and eat lunch, all while playing with wild animals. The Blind Alley Cafe, the ridiculous enterprise that keeps animals like raccoons and capybaras in indoor cafes for their customers' entertainment, sounded like a ridiculous idea. Unfortunately, it's not only real, but it's actually not the only cafe that exploits animals to make a buck.

It seems like Japan has just recently realized just how cute otters are. And now everyone wants to see one. This new otter obsession has helped launch a new trend in "otter cafes," where, again, people pay to have up close personal experiences with a wild animal. The trend is so popular that there are now more than a dozen otter cafes around Japan. Perhaps the most famous is the Kitanozaka Kawauso Cafe is located in Kobe. Kitanozaka Kawauso doesn't just stop there though, they also have woodland dormice, Java sparrows, degus, blue and Fischer's lovebirds, sugar gliders, hedgehogs, and path valley ferrets that you can not only play with, but you can take home!

While they might look cute and playful, otters don't want to play with you. They want to be in the wild where they can hunt, fish and play with their families. Witnesses who have visited otter cafes say that many of the animals exhibit self-harming tendencies and make shrieking and distress calls when they are forced to interact with customers.

Aside from the fact that otters are aquatic, social animals that should be In the wild with their bevy — a group of otters — this otter craze has put several species of Asian otters in danger of extinction.

According to World Animal Protection, otters are now being stolen from the wild in an effort to feed the demand for otter cafes and pets. All throughout Japan, Thailand, and Indonesia, otter nets are being sought out, and then ransacked. Otter cubs are stolen, meanwhile, the adults are electrocuted or shot and left for dead.

The poaching of otters is cruel, unsustainable and will ultimately end in disaster for both the wild populations and the unfortunate otters that are bred in captivity.

Otter cafes are one of the final destinations for stolen otters and as a result, are helping to destroy the species that they claim to love. It is time Japan crack down on these cruel and ridiculous businesses. Sign the petition and call on the Japanese Ministry of the Environment to ban otter and other wild animal cafes.
Sign Petition
SHAREShare With FriendsTWEETEMAILEMBED
Sign Petition
See more petitions:
You have JavaScript disabled. Without it, our site might not function properly.

Care2
These Cafes Serve Coffee with a Side of Cruelty
SHARETWEET