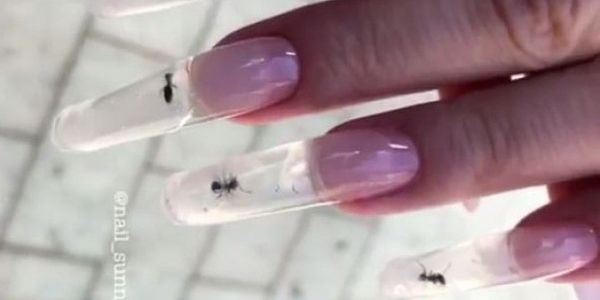 This Nail Salon Uses Live Animals as Nail Art. It's Not Cool, It's Cruelty.

"Just because you can, doesn't mean you should."

Nail Sunny — who is no stranger to testing the limits of nail art — went a bit too far for most of their fans this time. In a now-deleted video, the salon shows a nail technician applying long clear acrylic nails to a customer. On the other side, the employee adds another layer that seals the nail making it more like a vessel. Then, the technician grabs the ants with tweezers and stuffs one ant into each clear nail before fixing them on to the customer's fingers.

The poor ants struggle to find a way out. After pushback from their fans, Nail Sunny tried to calm their disturbed customers by saying they left air in for the ants to breathe. Unfortunately, without food, they would likely die anyway.

Now, we are the first here to say that some of you might read this and say: "yeah, but they are just ants who cares? I've probably killed hundreds or thousands already today just on my walk to work right?" What's the difference?

But there is a difference — a huge one. For starters, it's one thing to kill ants unintentionally as you go about your day. It's quite another to take a living, breathing animal, and use them as accessories.

Secondly, using an animal, no matter how small it is, for decoration and human entertainment normalizes and justifies the behavior. Last year, a Chinese company was called out for making phone bobbles using baby turtles. Live turtle hatchlings were stuffed inside tiny plastic bubbles no bigger than the size of a credit card. People all around the world spoke out against this cruelty. We should do the same for these ants because normalizing live animals as decoration should be a line we refuse to cross.

Please sign the petition and tell Nail Sunny to stick to art, not torture. Ask them to never use live animals for their nails again.
Sign Petition
SHAREShare With FriendsTWEETEMAILEMBED
Sign Petition
See more petitions:
You have JavaScript disabled. Without it, our site might not function properly.

Care2
This Nail Salon Uses Live Animals as Nail Art. It's Not Cool, It's Cruelty.
SHARETWEET