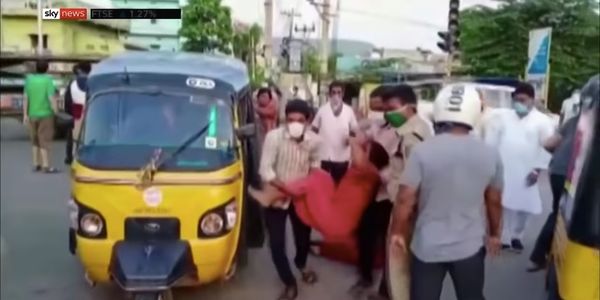 A Gas Leak Killed 12 People and Made Hundreds More Sick, But It Could Have Been Prevented!

In the middle of the night on May 7, 2020 residents of Visakhapatnam in India's Andhra Pradesh state started choking in their sleep. Those who remember what happened recount a white mist that smelled and tasted like death creeping into their homes, making them gag and their eyes burn. That was how the "accident" began, and it ended having killed 12 people and made hundreds more ill. As it turns out, the town of Visakhapatnam is home to a plastics factory, owned by LG Corp., from which a dangerous neurotoxin leaked -- poisoning anyone within a three kilometer radius, or about two miles. Now it has come to light that this plastics factory was not up to code, and should not have been operating in the first place.

We must demand justice for the victims of this leak, who were also victims of corporate greed and political apathy. Sign the petition asking for a federal investigation into why LG's plastics factory was allowed to operate without clearance!

The noxious gas leak was just the first step in a series of horrible accidents that could have been prevented. Sirens at the factory malfunctioned and failed to go off when the leak began. The factory had also been brushing off real concerns raised by its union about safety protocols and "poor maintenance of equipment," which likely led to the deadly leak.

LG preferred to pinch pennies when it came to the safety of their employees, who ended up paying the ultimate price. The port town of Visakhapatnam houses many factory workers and their families -- two children were among the dead after the accident. During the accident, stray and family dogs lay unconscious or dead in the street. Time will tell how the escape of poison gas will affect India's complex and fragile ecosystems.

The LG plastics factory was operating illegally for more than 10 years. Due to expansion of their operations, LG was required by law to file for a federal environmental clearance. But they never did. Instead, they decided to illegally cut corners and only obtain permits on a state level -- which require far fewer safety checks and assessments. Now, 12 people are dead in part because this industrial heavyweight was too lazy and cheap to ensure their safety.

This cannot stand. LG prioritized monetary gain over human lives and the health of our planet, and they must be held responsible. Demand a federal investigation into why this LG factory was allowed to operate without federal permits, so that they are held accountable and also so that this dangerous loophole is finally closed!
Sign Petition
SHAREShare this petition with friends!TWEETEMAILEMBED
Sign Petition
See more petitions:
You have JavaScript disabled. Without it, our site might not function properly.

Care2
A Gas Leak Killed 12 People and Made Hundreds More Sick, But It Could Have Been Prevented!
SHARETWEET